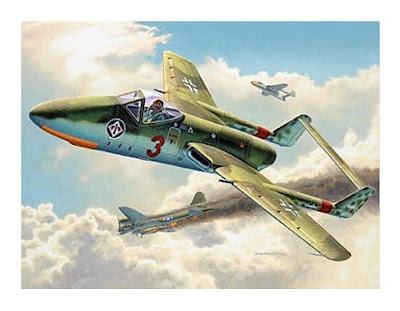 Iron Sky looks like it’s going to be an intriguing 2010 movie. Judging from the video clip we show here, Iron Sky should have Luftwaffe 1946 enthusiasts in seventh heaven (and we’re keen L46’ers here at SMN) as it includes so many popular themes and memes. Secret advanced technology - yes! Secret UFOs - yes! Secret moonbases - yes! There’s even a military sidecar outfit bopping along a lunar highway, though we’re guessing that, conceptually at least, it’s not powered by a BMW flat-twin internal-combustion engine. Pressurized gas from that big tank behind the handlebars might push the cylinders though...

These days the Luftwaffe 1946 fan has a huge range of choice, with even mainstream manufacturers like Revell providing some excellent kits to build. Among Revell’s L46 squadron is the 1:72 scale Focke Wulf TL Jager Flitzer (‘Hunter Streaker’) pictured above, which is a little more ‘real’ than many Luft 46 models, because the original did get as far as wind tunnel testing, though it was cancelled before entering production. The twin-boom layout echoed other designs of the era, including the British Vampire, which test-flew as early as September 1943, and the Flitzer’s predicted single-engine performance was as good as the Messerschmitt Me262 flying on two engines. A rocket booster could have increased speed to nearly match the climb-rate of the famed Me 163 Komet interceptor.

To Revell’s model - the Flitzer is neat and tidy, though it's a confirmed tail-sitter, so you need to pack the forward fuselage with lead-weight if you want the aircraft to stand on its undercarriage unaided. Panel detail is crisp and neatly done, and the general fit of components is good too, which means little filling is needed at the seams. The kit was first released some ten years ago, but it’s lasted well, and would look good in any lineup of Luftwaffe 1946 aircraft. Next year, let’s have some Iron Sky UFOs to build!