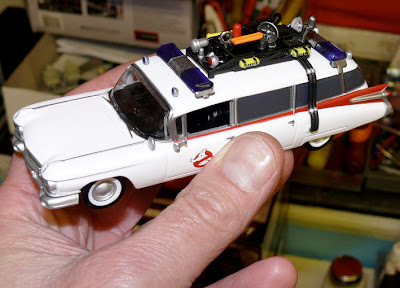 Christmas is coming, and for those living in the US at least, it’s also time for the Hallmark Corporation’s annual Keepsake Ornaments to decorate the tree. Hallmark’s early Keepsake offerings (the line started in 1973) included Santas, fairies, elves, polar bears and the like. But today Keepsake subjects range across the spectrum.

Still, that’s good for us model fans, as Hallmark includes items that are much more interesting than a bunch of mere elves. 2009 includes sci-fi offerings such as the speaking Robby the Robot from the movie Forbidden Planet as featured by Mat Irvine in our video above. The picture shows another movie tie-in, the Ecto-1 Cadillac from Ghostbusters, to roughly 1:50 scale. It too has a good quality sound chip, this time with an excellent rendering of the Ghostbusters musical theme.

Earlier Hallmarks have included spacecraft and characters from Star Trek and Star Wars. You knew Christmas was changing forever when you were presented, not with a festive Santa, but a laser-firing Klingon Cruiser! Hallmark's earthbound styles of transportation currently include both American pickup trucks and classic American cars. Although the scales are not stated, they are pretty detailed representations.

Robby the Robot is in the ‘Nostalgia and Fun’ section of Hallmark’s Keepsake Ornaments site here.

To give you a feel for prices on older items, there’s a collectible Star Trek shuttlecraft on eBay here.