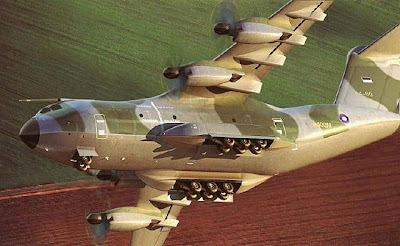 The European A400M military airlifter, falling roughly midway in size between the 'Fat Albert' Hercules and the jet-powered C-17 has - at long last - made its first flight.

For air-buffs, it's been a race (with betting on some aviation sites) as to whether the A400M or Boeing 787 Dreamliner would be first (or second) into the air. Well today that particular race is over, with the years-late and way over-budget A400M finally turning from a paper project into real aircraft. Boeing meantime, promises a 787 first-flight before the year ends - it could come as early as next Tuesday.

As for us model fans, well we're still waiting too, so come on Revell-Germany - these aircraft have to be right up your street for 2010 release! In 1:144 scale, an A400M would make a good partner for the neat C-17 already available. The same goes for the 787, with rumours indicating we could see a model of this next year too. Once again, there's a bigger kit already out there, in the form of the A380 double-decker, so please let's get that 787 out of the world of dreams and into scale reality!
Email ThisBlogThis!Share to TwitterShare to FacebookShare to Pinterest
Labels: A400M, Airbus A380, Boeing 787, C-17, Dreamliner, Revell, Revell-Germany
Newer Post Older Post Home