BOEING 787 DUE TO FLY TODAY 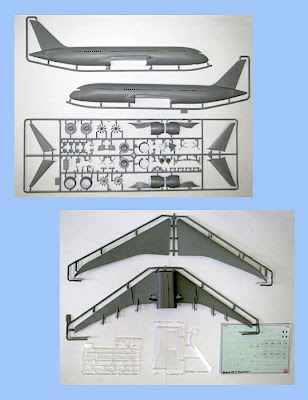 She’s years late and way over budget, but finally Boeing’s 787 Dreamliner is ready for flight. As planned, the twinjet should take to the air later today from Paine Field Airport, north of Seattle, US.

Taxi tests earlier this week were successful, and Boeing’s big baby even lifted her nose briefly, though not before the test pilot had applied speed brakes to avoid an accidental liftoff. You can see this, and hear the roar of the thrust reversers in the video above. The 787’s a pretty plane by any standards, and while those engines - airlines have a choice of Rolls-Royce or General Electric designs - may be massive, they will be incredibly economical and low on emissions too.

For model fans however, there hasn’t yet been too much activity on the kit front where the 787’s concerned. An exception is Zvezda, a Russian company that already has a neat 1:144 scale 787 in production, and which is slowly filtering into the retail supply chain. As you can see from the component layout pic above, it’s a relatively simple kit of an important aircraft for which Boeing already has some 840 orders, and is well worth adding to any collection of 1:144 scale airliners.

Zvezda's kit is becoming available at model stores and online suppliers; there's also a much smaller 1:400 Gemini Jets 787 you can see here.