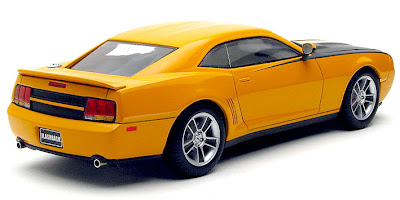 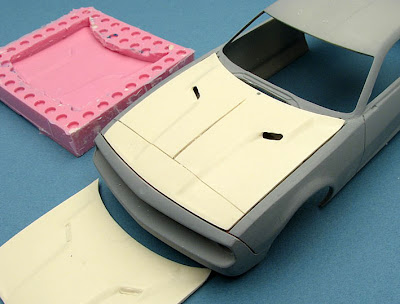 US pony cars began with the 1964 Ford Mustang, a sports car for everyman USA, even if it was based on the mundane Ford Falcon sedan (to the Brits, that’s a saloon btw). And now we’re up to the 2010s, with not only new, fire-breathing Mustangs, but also modern versions of its original competitors, the Dodge Challenger and Chevrolet Camaro. You can take your pick which one you prefer of the three, or you can do what car model fan Robert D did, and that was to combine elements of all three into a model auto-fusion concept, nicknamed the Challarostang.

In fact, sections of the three vehicles blended together without too much trouble at all, and Robert’s yellow-peril final result looks pretty much like it could have been designed in one studio instead of three. Of his Challarostang he says: “I like the main body of the Camaro better than the Challenger. I like the Challenger front end better than the Camaro. Once the idea was in my head to add Mustang to the equation, it all came together, because I found out pretty quickly that the three could combine into one”.

However, for those of you who like the real machines (and like ’em as separately running ponies) then the Car & Driver video road test above ought to be worth watching. The Camaro of course, has featured in both Transformers movies, and very nice it is too. This writer’s torn between it and the Mustang - handsome as the Challenger is, it’s doesn’t quite do it. Still, any of the three parked in front of the house would bring a happy New Year smile!

Thanks to Model Car Magazine forum, where these pics first appeared here.

If you fancy making your own custom cars, there are Ford Mustang kits here.