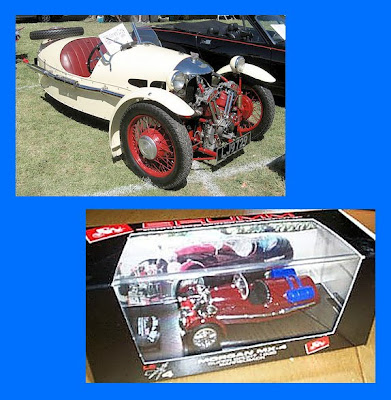 The Challarostang looks a goodie, but it occurred to us that model makers needn't stop with the US pony car inventory. So for 2010, what about making a tasty fusion of sports cars from Britain?

Maybe a mix of Jaguar, Aston-Martin and Austin-Healey for starters, but there's a galaxy of candidates from the hall of history - TVR, MG, Morgan and Sunbeam are just a few names to get started with.

Or there's a steampunk route for sci-fi car fans too - something like the Brumm 1:43 Morgan three-wheeler is just made for conversion into some sort of Victorian-era machine. Perhaps reborn as a 'Heroes of the Air' flying car, suspended under an airship gasbag. It really was an amazing little device, seen in the pic above in the All British Car Show at Yolo County Fairgrounds, Woodland, California, in May 2008.