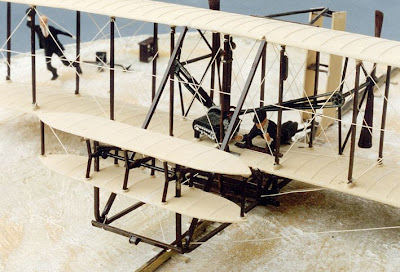 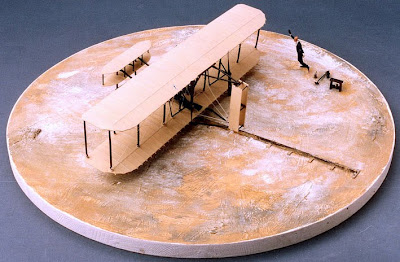 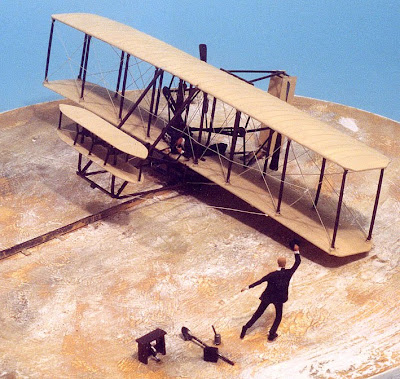 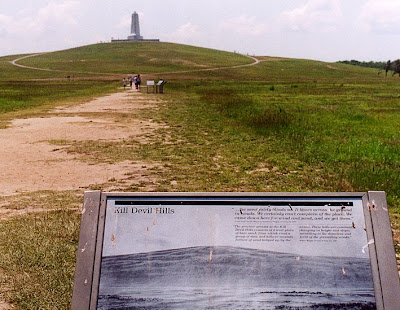 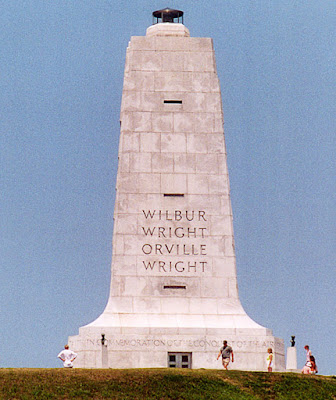 After putting together the Wrights article yesterday, Mat Irvine searched through his MMMM (Mat’s Marvellous Model Museum, a place of awe and wonder for any model fan) and hunted out this nice little diorama he built some years ago.

It uses the Monogram 1:39 scale kit as the showpiece, mounted on a 457 mm (18 in) circular base. The ground is a simulation of the dunes in the Kill Devil Hills area, North Carolina, where Orville and Wilbur Wright made their historic flights in December 1903. Note the complex rigging on the model, always an issue with those of us with less than nimble fingers, though not for Mat. Earlier kit issues supplied rigging thread in the box, more recent ones have left you to supply your own.

Mat also looked out some pictures that he took of the actual spot, and the two shown here give you an idea of the area. Note though, that these were taken in high summer - in December, the dunes are somewhat barer and breezier!

The pictures show, top to bottom:
1-3 Views of the 1:39 scale Monogram Wright Flyer.
4 Kill Devil Hill, looking toward the Wright Brothers National Memorial at its summit. The information board in the foreground is placed roughly where the Wrights made their first flight.
5 Closeup of the Memorial Tower, a massive 18 m (60 ft) granite monument that was dedicated in 1932. Out of shot are a marker stone and fascinating visitor centre.
Email ThisBlogThis!Share to TwitterShare to FacebookShare to Pinterest
Labels: 1:39 scale, monogram, Wright brothers, Wright Brothers National Memorial, Wright Flyer
Newer Post Older Post Home