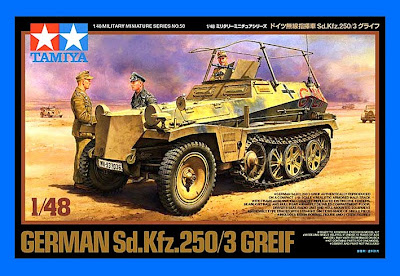 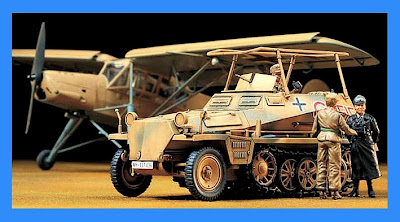 Mr J reports
Tom Daniel’s Rommel’s Rod makes a terrific custom model, but it did start us thinking about the inspiration for it, Rommel’s actual halftrack, named the ‘Greif’. That’s German for ‘Griffin’, a mythical creature of divine power, though there’s also a hunting dog breed with a similar name, so maybe Rommel liked both.

Airfix has an elderly (but still OK) 1:32 model that you can often find with some hunting around - we turned one up on eBay Canada. To a smaller scale, but newer and more useful as a diorama accessory is the beautiful little 1:48 scale Greif in Tamiya’s Military Miniatures series, complete with a reasonably lifelike Rommel figure, and two crewmen.

It measures just 102 mm (4 in) long, yet packs in plenty of lovely detail, including a radio, machine gun, frame antenna and floorboard texture. Of course, you don’t have to build it as a Rommel special - there were dozens of design variations on the basic vehicle, so the choice is yours.

On the SMN wish-list would be a Rommel’s Rod to the same scale, so you could park them next to each other on Mat Irvine’s builder’s sand diorama - oh well, one for 2010 maybe.

The 1:48 Tamiya Greif halftrack is available in model stores and online here.