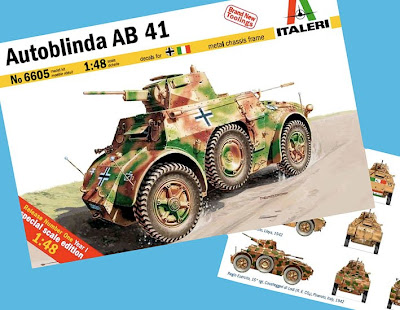 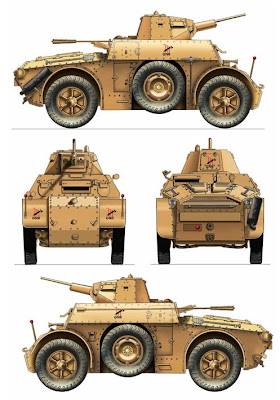 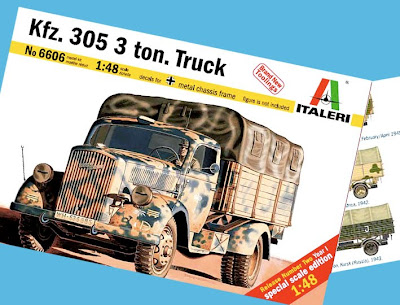 At last 1:48 seems to be the scale of choice for new AFV plastic kit offerings. Tamiya already have a mouthwatering range of military subjects, even if it’s not terribly large.

And now Italeri is launching a range of new-tool 1:48 scale vehicles. The first two are due soon, and are both World War II subjects.

The armoured car is an Italian Autoblinda AB 41, in production from 1941, hence the number. The utilitarian looks belied its usefulness (though the four-wheel-steer system caused problems) and some were fitted with metal wheels to speed along Italian rail tracks. After Italy surrendered in 1943, German forces confiscated some 57 AB 41s and built 120 more. And one of these is the subject of this kit, complete with Iron Cross markings.

The Kfz 305 truck is a soft-top three-tonner that was used in virtually every Axis combat arena, and Italeri’s kit features a metal chassis frame, which should give the finished model a nice heft. Decals are included but, sad to say, the stern-looking driver figure shown on the box top is not part of the kit. Shame on your Italeri for that omission, but let’s hope there’ll be 1:48 scale figures out soon. The larger scale 1:35 figures made to match Italeri’s superb S100 Schnellboot are excellent, so there’ll be no problem in sculpting a new set of troops - let’s hope the marketing bods reckon they’re a goer.

These vehicles will be in model stores and online suppliers soon. Meantime, feast your eyes on a range of Italeri stuff, including the S100 Schnellboot here.