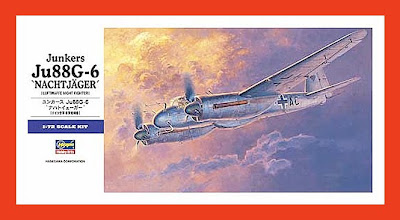 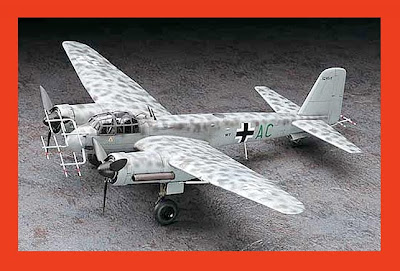 World War II model makers, in particular aircraft fans, will be pleased to see the latest from Hasegawa. The 1:72 scale model kit of the Luftwaffe’s Junkers Ju 88 G-6 is the radar-equipped night fighter (‘nachtjager’) version, complete with nose and tail sprouting spiky radar antenna trees. The kit also comes with a pair of the upward-firing cannon that were often fitted to the G-6, as well as three sets of decal markings.

The Ju 88 was probably the single most successful German twin engine plane of World War II, with more than 15,000 of all types built throughout the war. Hasegawa’s kit is a neat one, with a wingspan of some 280 mm (10.5 in) and has 150 parts, enough to keep a model maker busy during the cold, snowy nights we’re having in the UK at the moment.

The video is worth watching, as it shows all sorts of German night fighters of the era, including detail shots and commentary on Ju 88 G-6 version.

Talking of German aircraft, here’s another mention for the Luftwaffe Museum in Germany. We don’t think there’s a Ju 88 on display, but the Museum has many other interesting aircraft, and the site is well worth a visit here.

The Hasegawa Ju 88 G-6 will be with stores and online suppliers soon. Meantime, the Hasegawa kit of the earlier Ju 88 A-4 is available now here.

The pictures show, top to bottom:
1 Box art for the Ju88 G-6 from Hasegawa.
2 The assembled and painted kit.