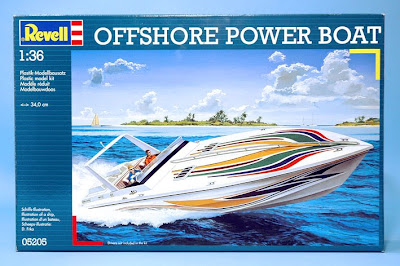 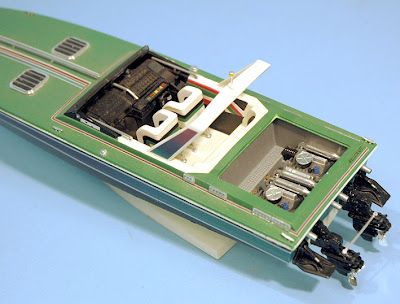 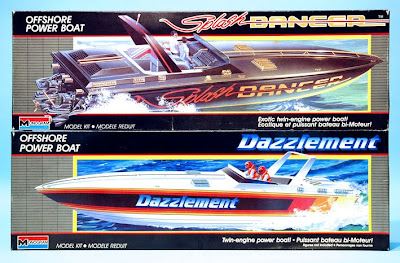 Mat Irvine reports
Cars and boats - of the type towed behind a car - have always gone together as far as model kit companies are concerned, so much so that these boats are usually included in ‘car’ listings, rather than ships, and can be subject to the same sort of customising usually reserved for their land-based counterparts.

Both Revell and AMT have issued such boat kits, used for water-based drag racing or for towing skiers, in various forms over the years. Monogram never did one as such, but when it obtained a licence for the 1980s TV series ‘Miami Vice’ besides two cars, it also produced the Scarab offshore power boat owned by Don Johnson’s police character, Sonny Crockett.

The only slight problem is that although AMT and Revell stayed in the same 1:25 scale as the vast majority of their car kits, Monogram chose to make the Scarab to 1:36 scale, a slight pity as it meant you couldn’t really display it directly alongside the two cars.

The Miami Vice Scarab was issued in 1986, but in 1988 it was joined by a second version called Splashdancer with white parts now in black, and chrome plating in a gold finish. By the following year both of these had gone, but a third variation came on the scene using the original white and chrome parts, and now named Dazzlement. It then disappeared for two decades.

However Dazzlement has now returned as a reissue from Revell Germany, though it’s called purely an ‘Offshore Power Boat’ - but it is basically the same kit. It’s well detailed, on a par with a car kit. There’s even a ‘beverage tray’ - it’s not named, but it's in the box as part number 65. Under a hatch there are twin Mercruiser V8 engines each driving a separate prop, cockpit detail with a right-hand driving position (as are most powerboats), and various grilles, vents and rails over the superstructure. There’s even a roll bar, though here its function is to support the navigation light.

Two changes are that the original chromed parts are now plain, and the decals don’t represent Crockett’s Scarab. However, the kit’s origins are not forgotten, as both the box side and plans state: “Don Johnson in the well-known TV series, ‘Miami Vice’ used this mode of transport”.

SMN note:
Aaah... Miami Vice - one of Mr J’s old time fave copperamas. And note the retro-80s video clip above - for true Vice fans, Don Johnson is still ‘the man’ down on the waterfront, with the 2006 movie remake a pale shadow of the original. It’s a pity though that cockpit figures haven’t been included in the new powerboat.

The Revell Powerboat is available from model stores and online suppliers, including Amazon here.