A QUESTION OF SCALE 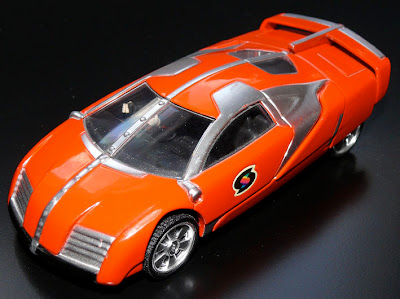 HERE AT SMN TOWERS, we’re always discussing the importance (or not) of scale, a subject that’s hardly surprising bearing in mind the title of the website.


But it really can be a trying issue - back in the early days of plastic kits, when manufacturers were in fit-the-box mode, it was hard sometimes to get any two models to match up, let alone assemble an entire collection. Happily things have changed dramatically since then, and few new releases these days are in anything but one of the popular scales. However, scale mismatches do still go on, and not only in plastic kits, as the examples here show.

The red Cheetah car in these pictures is from the Gerry Anderson TV series ‘Captain Scarlet,’ as is the grey Rhino pursuit vehicle. They are both diecast releases that Corgi designers worked hard over, with fine castings, and working parts that added to the sci-fi qualities of the popular show. They gave the Cheetah flip-out spoiler and wings, the Rhino extending front and rear rams, with a pop-up door revealing the good Captain himself. So far so good... 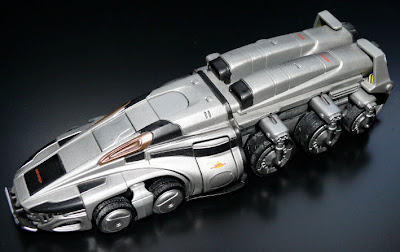 However, the two vehicles are to different scales - the Cheetah is about 1:43 scale, while the Rhino is half that size, at roughly 1:87. Grrr! So it boils down to the Cheetah being able to sit with a collection of model cars, while the Rhino can do its work in an H0 gauge model rail setting.

The pity with the two road vehicles is that Corgi, could have improved things by perhaps releasing the Rhino as a pair with a special matching-scale Cheetah.

The H0-gauge locomotive (below) is a fairly elderly custom-painted US diesel made by AHM from the former Yugoslavia, and gives a good idea of the massive size of the Rhino. The loco was picked up very cheaply at a garage sale, and still works nicely. 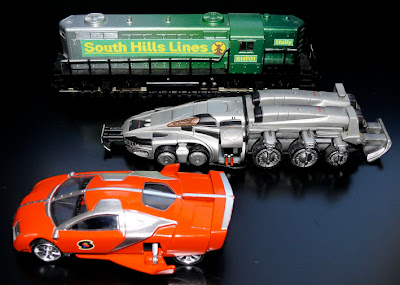 On the plus side, the Corgi pair are attractively made and need little in the way of tweaking to make them suitable for display. The Rhino had its garish metallized badge taken off and was treated to a coat of satin-spray, plus grey weathering to give it a calmer, used look, in keeping with its chase-the-bad-guys TV role. The Cheetah still awaits something of the same treatment, though the badges look better with the red paintwork. In both cases, the driver figure is well done.