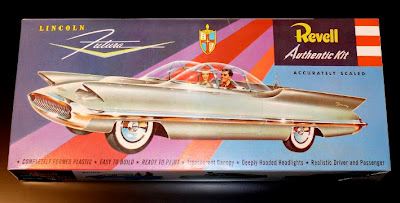 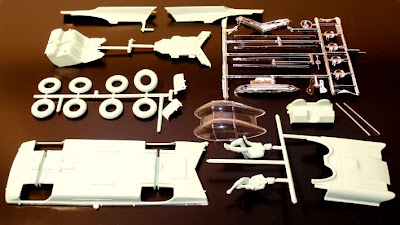 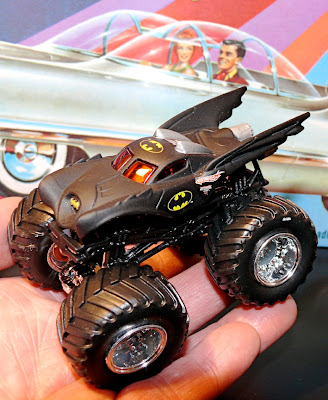 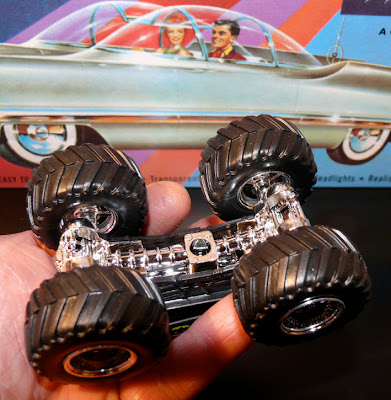 The famed Batmobile has a long history, and more design changes than we can count. The tale of this fabled vehicle began with the 1955 Lincoln Futura 'dream car', touted at the time as: ‘A $250,000 laboratory on wheels’, complete with twin plexiglass canopies, hooded lights and air scoops for cooling the brakes. However, after successful display at various auto shows, the car was sold to the ace of auto-customizers, George Barris, who a decade later worked with stylist Dean Jeffries to produce the Batmobile of 1966 we know so well from the successful TV series.

Before that however, the Futura had been modelled to 1:25 scale by Revell as part of the Modern Car Kit series and the pictures we show here are of the kit's 1995 reissue. It’s simple enough, containing just 36 parts plus a pair of metal axles. The wheels were moulded in two halves as standard hard-plastic components - car kits had not yet evolved to include separate tyres. The box art is typical Revell of the time - drop-dead gorgeous, with a very happy pair of middle-class consumers under those twin canopies.

The instruction leaflet doesn’t stop at assembly notes, but also includes display suggestions, such as modding the Futura to make a bookend, an ash tray, or a TV-top decoration. Ah, those were the days!

Coming up to date, we show a recent Hot Wheels 1:64 scale Batmobile in the form of a ‘Monster Jam’ truck. Hot Wheels designers have had a field day with the swoopy finned design to produce a nice little model, with satin-finish paint, lots of chrome (even if it is somewhat overbright), and those huge tyres. A nice feature from Hot Wheels is the steering mechanism - just lean the vehicle to left or right and all four wheels twist and turn to match your movement.

You’ll have to hunt around a bit for the Lincoln Futura. We found one for sale on eBay here.