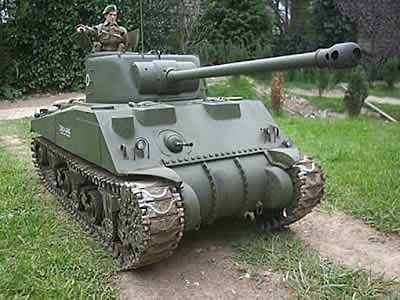 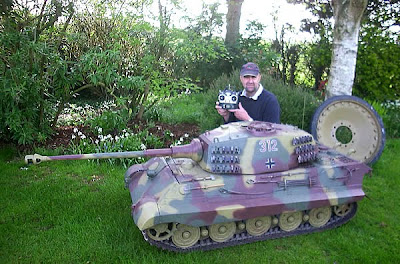 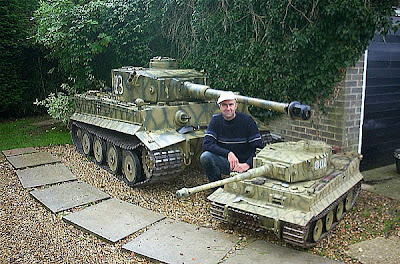 Most entries in SMN are of bookshelf-size models, ranging from 1:35 or so (model AFVs) down into the 1:700 range (model ships), but sometimes a different ‘something’ comes along that makes us step back in awe - and today that’s the world of BIIIGGG scale model tanks, represented in the pictures here, shown courtesy Mark 1 Tanks. As you can see, the Mark 1 AFVs are simply humungously huge - certainly big enough to chew up the garden with tread patterns through the flower beds!

1:6 scale tanks are highly suitable for using with existing military figures and equipment, such as those from Hong Kong-based Dragon, while 1:4 scale ones are that much bigger and heavier - the Tiger 1, for example, measures 2.1 m (7 ft) including the gun barrel, and weighs some 200 kg (440 lb).

Options on tanks like this typically include a turret that turns, elevating gun with firing sound and recoil, there’s even a smoke generator to simulate engine exhaust fumes, necessary because the model runs on clean electricity - power comes from a 12 or 24 volt supply, with tank commanders using 6-channel RC for precise control of all functions.

At this scale, the level of detail you can add to a basic kit is near-infinite, and a decent photograph will make a model tank look as utterly convincing as the real thing.

The pictures show just a few of the tanks available from Mark 1 Tanks.