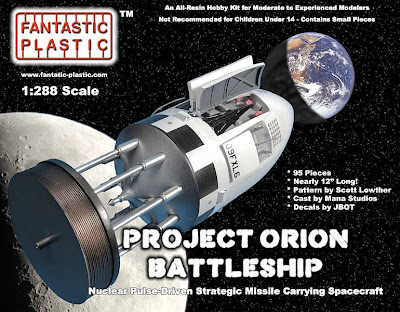 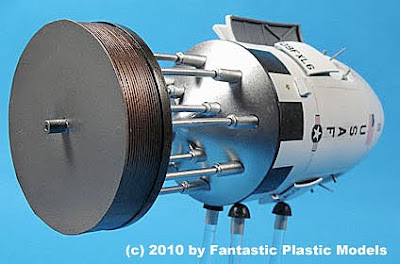 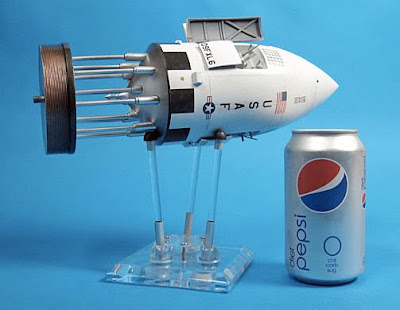 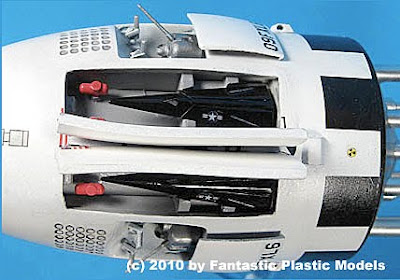 In the wake of this week’s cancellation of the ‘Back to the Moon’ Constellation Program by US President Obama, kit company Fantastic Plastic’s 1:288 scale model of the 1960s-era Project Orion nuclear spacecraft is particularly interesting. Think of a 4000-tonne spacecraft propelled not by chemical rockets, but by massive pulse waves from a string of nuclear bombs blasting away behind the stern. Yes, it was a serious proposal that could have enabled a trip to Pluto and back in less than a year.

The military also had ideas for the concept, the Project Orion Battleship (POB), which would lurk in lunar orbit and then, if World War III broke out, would have hurled waves of nuclear missiles at Soviet targets. However, the Nuclear Test Ban Treaty of 1963 put paid to the whole idea of nukes in space, civil or military, but nearly half a century later, Project Orion is still a popular subject for space enthusiasts.

The Fantastic Plastic POB kit ought to satisfy some of that ‘What if?’ curiosity. It's a 95-component multimedia kit, created in CAD by Scott Lowther, and cast by Mana Studios. The completed model measures 305 mm (12 in) long, and has 12 functioning pulse-wave engine pistons, plus a range of interior features that include a trio of five-inch guns, six howitzers and two winged landing craft. Decals are by specialist supplier JBOT.

We reckon that if the Avatar planet Pandora had an Orion battleship attacking the natives, there’d have been no contest! The kit is available from Fantastic Plastic at $150.00 USD plus shipping.