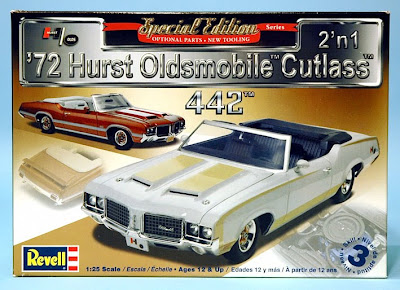 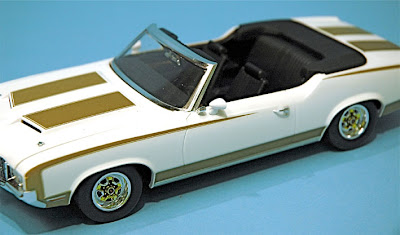 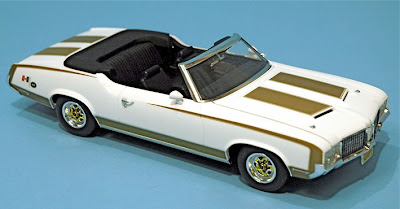 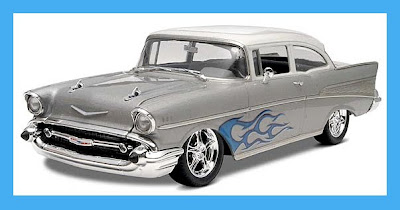 Mat Irvine reports
Things changed for the rather staid Oldsmobile auto brand around the mid-1960s, when the ‘442’ package was introduced. Standing for four-speed, four-barrel carburetter, twin exhaust pipes, the 442 bootstrapped Oldsmobile up with Pontiac and other performance names as a car in which you’d be proud to cruise the streets, a V8 engine lazily burbling and bellowing under the long, long hood.

Street cred was improved even more when performance supplier Hurst came up with hairy Olds packages aimed at the drag strip, matching them with street versions, complete with special exterior colour panels.

Now Revell US has released a new-tooling 1:25 scale kit of the 1972 Olds Cutlass 442 in its 2 ’n 1 range, shown in the top three pix above. Revell has supplied the kit in what is becoming the modern style, with one-piece bodywork, full engine detail, chassis with plenty of detail, and various optional parts. The interior is a neatly produced multi-piece assembly with separate side panels, seats and floor - a component breakdown that certainly makes painting easier!

The 2 ’n 1 kit’s versions provide a ‘standard’ 1972 Olds Cutlass 442, or the more interesting Hurst option. In real life, both cars were pretty fast, though the white bodywork and gold panels of the Hurst are more distinctive, and this is the version featured in my model build here. The kit also has parts that allow you to assemble automatic or stick-shift versions, plus alternative transmissions and interior central consoles.

All in all, this is a decent kit of a 1970s street machine. Unfortunately, so far as Oldsmobile itself is concerned, the brand was dropped by General Motors in 2004. The last Olds car, an Alero four-door sedan, rolled off the line on April 29 that year. However, Oldsmobile was one of the longest-serving car marques - when production stopped, it was 107 years Old.

And joining the Revell Cutlass kit in the same scale is the latest in the 2 ’n 1 line, a neat 150-part ’57 Chevrolet Bel Air (bottom pic) that you can build in either stock or street rod form, complete with flame decals and multiple custom options.

These kits are becoming available from model stores and online suppliers.