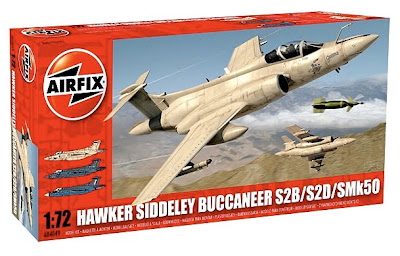 David Jefferis reports
Airfix continues its renaissance with this kit of a classic Cold War-era strike aircraft, the British Hawker-Siddeley Buccaneer. Airfix provides us with parts to make three versions of the low-level twin-jet attacker, the S2B, S2D, and the South African export model S50.

The kit has plenty of detail, though thank goodness Airfix no longer features some of the non-working ‘working’ parts of the very first NA39 kit, back in the early days of the company. I well remember the ‘rotary bomb bay’ that was warped, ill-fitting, and that didn’t do the job as advertised!

The present kit features 114 parts, with a wingspan of 185 mm (7.3 in) and length of 267 mm (10.5 in). The undercarriage can be assembled up or down. The Buccaneer comes packed in the now standard, and highly attractive, new-style Airfix box.

The video shows the aircraft and crews of 12 Squadron, Royal Air Force, taking part in the 1978 Exercise Open Gate. This was a NATO exercise aimed at keeping the Straits of Gibraltar open during a possible conflict with Warsaw Pact forces.

Video courtesy Central Office of Information for the Ministry of Defence (RAF).