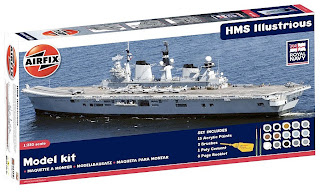 David Jefferis reports
Airfix is busy as a beehive these days, with product after product striding out the doors - the breath of life from new ownership means that times are almost back to the company’s glory days, when schoolboys the length and breadth of the UK could be seen treading the wooden floorboards of FW Woolworth (a chain that’s now history - sigh) on the hunt for the latest Airfix kit-in-a-bag. 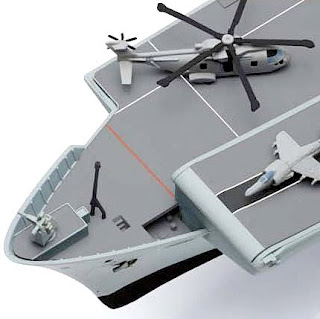 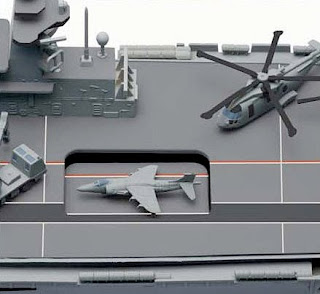 1:350 scale carrier video
The latest offering gives both maritime and aerospace model fans a treat, as it’s a 1:350 scale model of the Royal Navy’s HMS Illustrious - 'Lusty' to her crew - and it’s loaded for bear, with a flight deck packed with aircraft, helicopters and neatly-cast detail. Airfix has released a video overview of the carrier, which you can see above. The model is a test shot, so all you get to see is the bare plastic - for a taste of what the final result could look like, just have a look at the box, which is illustrated with a photo, rather than the CGI-based imagery that’s becoming standard across the rest of the Airfix range.
What’s in the box?
First off, that 1:350 scale means the kit builds into a BIG ship - the Lusty scales out to some 603 mm (23.7 in) long, which is slightly more than two sheets of A4 paper laid end to end. And even the aircraft aren’t too miniscule - the Harriers have a wingspan of around the 21 mm (0.83 in) mark, while the Merlin and Sea King helos are accurate enough: the Merlin’s paddle-shaped rotors look particularly convincing. In all, there are some 276 components, enough for most model fans, especially as painting those aircraft is a several-nights job all by itself.

Summation
Nice one Airfix - of course HMS Illustrious is hardly the biggest carrier afloat, as you can see from the pic showing her next to the USS John C Stennis - but she’s a fine warship nonetheless, and will make an excellent member of a desktop battlefleet. The kit also comes with 15 pots of paint, a pair of brushes, a bottle of polystyrene cement and an eight-page information booklet. The paints aren’t much good for serious modelmakers, but are doubtless useful for beginners, and some extra poly cement always comes in useful.
Pictures courtesy Airfix, US Navy, Royal Navy.
The Airfix HMS Illustrious kit is available from model stores and online suppliers including Amazon here.
There are also other warships available in smaller scales here