ROBBY THE ROBOT KIT FROM THE MOVIE ‘FORBIDDEN PLANET’ 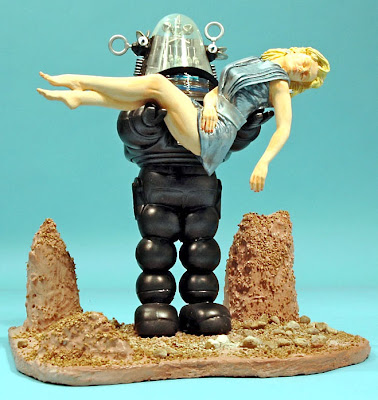 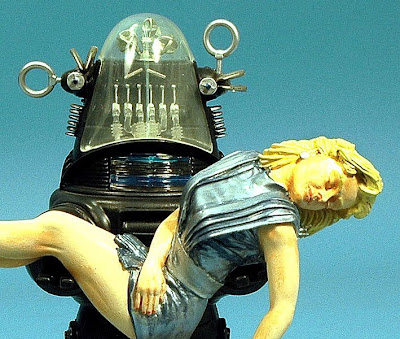 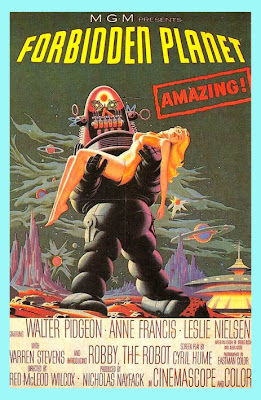 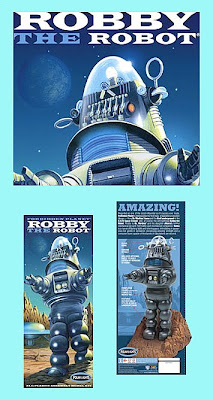 Mat Irvine reflects
“Welcome to Altair IV gentlemen…” were the words of one of science fiction’s best-known robots, Robby, from the 1956 movie Forbidden Planet, which had its first US screening on this day 54 years ago.

Forbidden Planet was a very loose reworking of Shakespeare’s The Tempest, and if you feel inclined, you can find a movie parallel to all the play’s characters, not least the spirit Ariel, which takes on a more solid movie form as Robby the Robot.

In the scale model world, Robby is one of the classic kits that the original Aurora model company never made. Aurora had already produced the robot from the TV series 'Lost in Space', so Robby would have made a natural follow-on, especially as ‘he’ came first and the LiS design was influenced by Robby - not surprising, as it was created by Bob Kinoshita, one of Robby’s original designers.

Robby may not have appeared as an original Aurora kit, but this situation was rectified when the Polar Lights kit company came on the scene. One of its kits was a Robby the Robot to the same scale as the Aurora LiS robot, which Polar Lights had already recreated.

But a somewhat misleading aspect of the movie’s publicity was the poster, echoed on the box-art. Although voted ‘Fifth Best-Ever Movie Poster’ in a ‘Premier’ magazine poll, it shows Robby carrying Altaira, the daughter of scientist Dr Edward Morbius, in his arms. She wears a skimpy gold costume, and despite spending much of the movie changing from one costume to another, none of them were this shade of gold, and - also to the point - Robby never carried her like this at all!

However, this didn’t stop the doyen of figure modellers, Jimmy Flintstone, producing a simple resin kit representation of spacegirl Altaira, to the correct size and shape to be carried by the Polar Lights Robby. She is clad in a costume seen briefly, (which is both the scene length and nature of the costume), near the end of the movie. This costume is in pale blue metallic fabrics, not gold, and in a shade more used to being painted onto model cars. So it almost represents the movie poster - but not quite.

Robby has since been reissued by Round 2 Models, a US company that owns a family of brands, including the Polar Lights name. The kit comes without Altaira though - the Jimmy Flintstone figure I used here came from CultTVMan’s on-line shop.

My model shows Robby carrying Altaira on a simple scratchbuilt base I made, to represent the alien planet Altair IV, where the movie's events take place.

And Finally...
Forbidden Planet is one of those movies often quoted as being ‘down for a re-make’. Latest rumours are for a James Cameron project slated for 2011, though one has to wonder, ‘why?’

The pictures show, top to bottom:
1, 2 My builtup model of Robby carrying Altaira, and a closeup.
3 The Forbidden Planet poster.
4 Old Polar Lights box.
5 New version from Round 2 Models.

Visit Robby the robot at Round 2 Models here.

THE BRITISH COLUMBIA Aviation Museum is well worth a visit if you are on Vancouver Island, Canada.