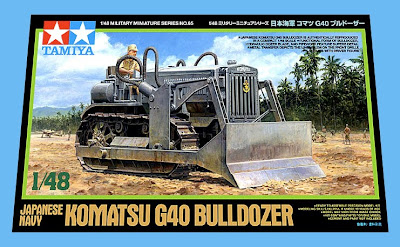 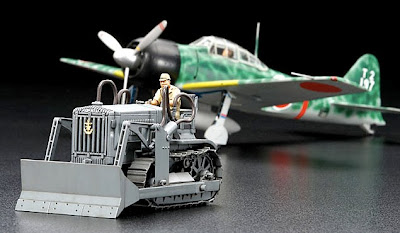 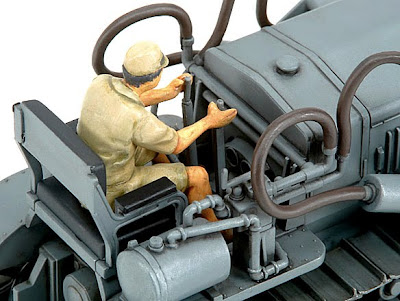 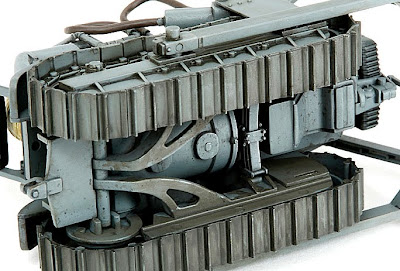 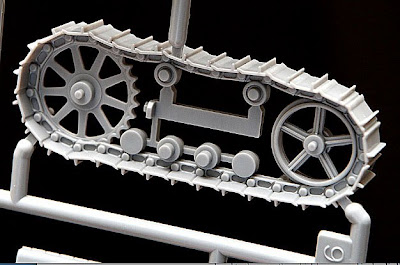 Komatsu is second only to the US Caterpillar company in the construction machinery stakes, and actually makes the biggest ’dozer in the world, the Model D575A. But the first Komatsu bulldozer was much smaller than the D575A, and it’s this early G40 that is the latest 1:48 military vehicle released by Tamiya.

Komatsu developed the G40 to speed up construction of Japanese airfields - until it became available, most runways were produced purely with manual labour - and some 150 G40s were produced from 1943 until the end of World War II. The Tamiya model is a dinky little thing, just 75 mm (2.9 in) long, but the detail is very neat for all that, with components such as hydraulic lines, front grille, suspension system and, of course the ’dozer blade, all well reproduced.

The tracks are one-piece plastic parts though, and so are non-moving items. However, Tamiya has included a decent driver figure, who holds the controls realistically. An unusual feature at the front is the grille badge, which is included as a metallized-decal, and very handsome it is, too.

As you can see from the picture above, the G40 is suitable for use with typical Japanese military aircraft of the time, here a Mitsubishi Zero fighter. Add a section of runway, some figures, plus a stand of palm trees, and you have the makings of a very attractive diorama setting.

An interesting point is that the name engraved on the front grille is 'Komatu', without the 's'. That's how the real thing is, so Tamiya has it modelled correctly, but SMN can't find out the story behind the spelling - does anyone out there know the answer?

The G40 bulldozer is due out soon; meantime you can obtain the 1:48 Tamiya Zero as a kit with crew figures included, which would work particularly well in a diorama setting, here: 1/48 A6M5/5a Zero Fighter, Zeke

You might also like to look at a set for extra detail here: Mitsubishi A6m Zero Fighter Photo-etched Detail Set 1-48 Tamiya