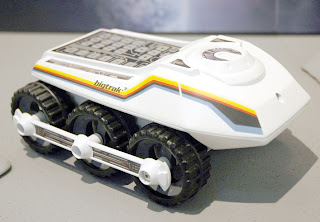 Mat Irvine reports
Anyone who remembers the eighties, (1980s, that is) will likely recall the Bigtrak, one of the first toys to incorporate computer commands. On the face of it, these were extremely simple: “Go forward x inches; stop; turn 90 degrees right; go forward y inches…”. All of which seems rather basic these days, but Bigtrak was a state-of-the-art product then, and with nostalgia not being what it was, it is returning to the stores very soon. Actually, it is slightly different - 2010’s Bigtrak Junior is a scaled-down version of the original. 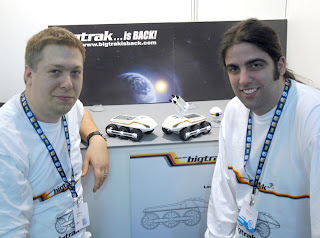 BtJr’s return is masterminded by Dubrek Ltd, a company that is also behind the return of the electronic Stylophone musical keyboard, as beloved by Rolf Harris and David Bowie (it produced the ‘space sounds’ on Bowie’s huge hit of 1969 Space Oddity). The connection with the Stylophone is because one of the faces behind Dubrek is Ben Jarvis - and Ben’s Dad, Brian, invented the Stylophone way back in the 1970s. Now, with the Stylophone on sale once more, Ben and colleagues, including Tim Crook, have turned their attention to Bigtrak, acquiring the rights to reproduce the design, albeit in ‘Mini-Me’ form. 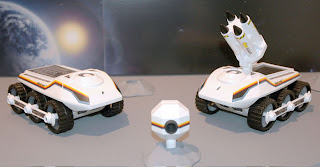 Bigtrak Jr will incorporate many of the updates in electronics that three decades-plus has bought, and will be available with a host of accessories. Bigtrak (Senior?) could boast only one, a trailer, but BtJr will have firing rockets and even a webcam amongst its accessories.

Bigtrak Jr is due for release around mid-2010; meanwhile you can see some details here.

The Stylophone is here.

The pictures show, top to bottom:
1  ‘Bigtrak is Back’ – at the London Toy Fair, January 2010. Without any ‘scale’ it’s difficult to tell BtJr from the original, which is about three times larger.
2  Two of the faces behind Dubrek: Ben Jarvis (left), who also holds one of the UK model rocket launch records, and Tim Crook.
3  Accessories for BtJr will include a rocket launcher (right) and a webcam (middle).

Here are some radio-controlled items - not strictly in Bigtrak territory, but interesting even so.