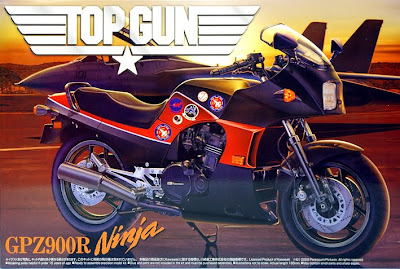 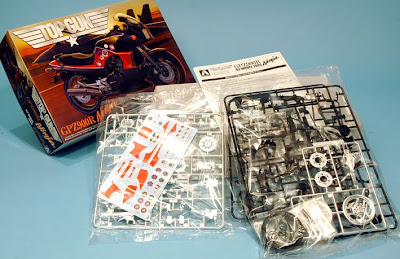 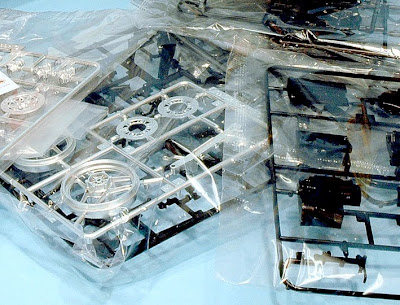 Mat Irvine reports
One of the biggest movies of 1986 was Top Gun, with Tom Cruise playing Lieutenant Pete “Maverick” Mitchell (as plotted, the call sign was one he took literally) at the US Navy’s Fighter Weapons School. The video should give you a reminder of the movie's plot, people, and of course, the planes.

Top Gun is back
Given that the storyline was very aircraft-intense, it was a natural for the model companies and both Airfix and Testors issued a number of kits for aircraft featured in the film. Well, that was back in the 1980s - but now in 2010, we have a new Top Gun kit! Aoshima has taken its Kawasaki GPZ9000R Ninja motorbike kit and modified it to represent the one Maverick rode in the movie.

New detail parts for Top Gun superbike
The basic kit has been in the Aoshima list for some time, but this model has new front forks and rear swing-arms, new wheels and new rear-view mirrors. The decals also reflect the version seen in the movie, including the “No Wussys” sign! The kit is moulded mostly in black, with two satin-plated and one chrome-plated runners plus one in clear plastic. Besides the vinyl tyres, some vinyl tuning and hoses are also supplied, which is a good thing as the kit is to a large 1:12 scale.

It’s an intriguing release, but does sort of make you wonder slightly - what else could suddenly appear from the world of quarter-century old movies?

The Aoshima Kawasaki Ninja was kindly supplied by Models for Sale, who can supply this bike plus others here. 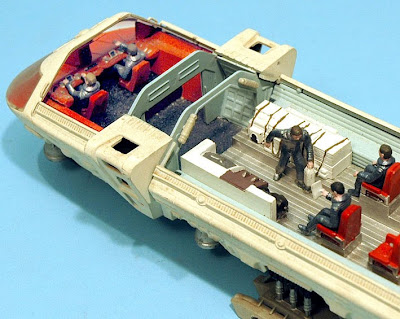 Here's a bigger picture of the Moonbus, to show the crew seated in the flight deck, which you couldn't see before. It looks like a spacious place to be.

As an aside, what a shame it is that the combined vision that 2001 Director Stanley Kubrick and author Arthur C. Clarke had of the future development of spaceflight has never come to pass.

If the US had just kept turning out those Saturn 5 rockets, then there would surely be a permanent Moonbase by now, and the Moon itself might even be the 51st state.

As it is, Chinese or Indians are odds-on to be the next humans on the Moon - and good luck to them, if their governments have the cojones and vision to get on with it.
Email ThisBlogThis!Share to TwitterShare to FacebookShare to Pinterest
Labels: 2001, Moonbase, Moonbus, saturn 5

MOONBUS KIT FROM THE CLASSIC MOVIE 2001 REISSUED BY MOEBIUS MODELS 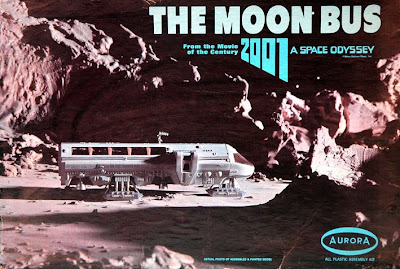 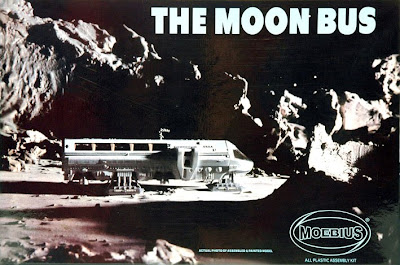 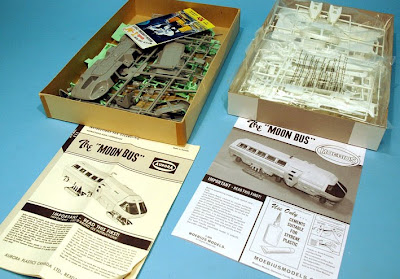 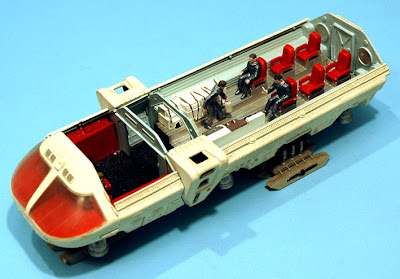 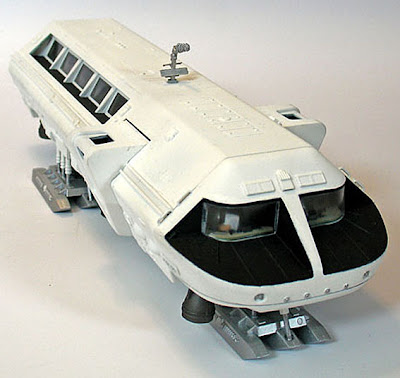 Mat Irvine reports
The Moonbus from 2001: A Space Odyssey was first issued as a kit by Aurora in 1968, along with Aurora’s take on the Orion spaceplane from the same movie. The Orion was reissued in 1975, but the Moonbus never reappeared and prices for the kit have tended to go through the roof on certain on-line auction sites.

Retro-engineered Moonbus
Moebius Models - one of those new model companies often dubbed the ‘New Aurora’ - has been contemplating the Moonbus for a couple of years, and now it is available online and in stores. The approximately 1:55 scale spacecraft is a retro-engineered kit - one that is copied from an existing original, with subtle changes made to improve assembly.

Useful improvements
Changes include the addition of locating pins and the like, which are hidden once assembled. But there have also been improvements to visible parts. The cockpit windows on the Aurora kit were single-layer transparencies, with an inner window canopy missing. Moebius have rectified this error. Also, the side passenger windows have been corrected and are now individual window panes, instead of one long strip on each side. The kit includes nine decently sculpted figures, so the craft can be fully occupied if you wish.

More 2001 spacecraft in the wings?
If the Moebius Moonbus is successful - and the way the kits are selling, it seems more than likely - there may be more spacecraft from this most famous science fiction movie coming soon. Apart from the Orion, none have been made in conventional injection-moulded kit form.

The pictures show, top to bottom:
1 The original Aurora box.
2 The Moebius Models reissue - the only real difference is that movie references are absent.
3 Aurora components (left) came in grey and light green, the new kit is in white.
4, 5 My Aurora kit-build shows the removeable roof and interior.
6, 7, 8 Views of the Moebius kit, which looks extremely convincing when completed.

Sample kit supplied by Moebius Models. You can visit the site here.

The Moonbus is also available here.

A recommended reference book to the movie is Piers Bizony’s Filming the Future published by Aurum Press. It is available here, though the last reprint was in 2000, and used copies are not cheap. 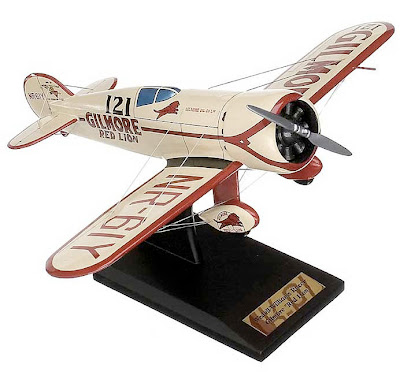 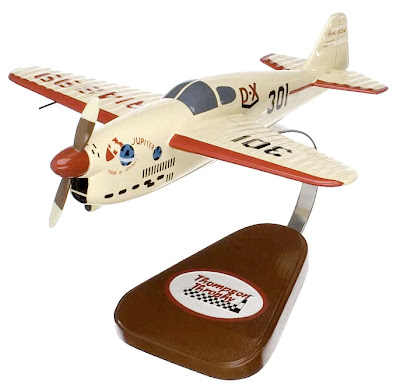 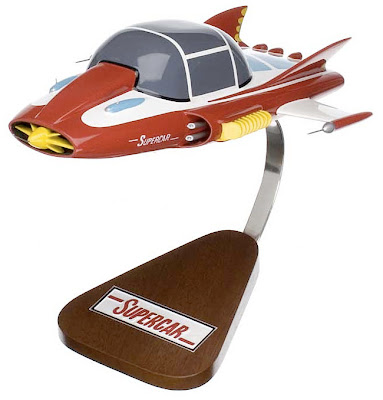 David Jefferis reports
What about wood for a change, instead of plastic? That’s what’s on offer from the Arizona-based Airplane Modelworks outfit.

Wide range from Airplane Modelworks
Airplane Modelworks has a huge range of display collectibles on offer - aircraft of all sorts naturally, but also for sale are tanks and spacecraft, not forgetting some sci-fi exotica, such as the machines from Gerry Anderson’s TV series Thunderbirds and Supercar.

Short on detail, long on elegance
It’s important to realise that these are ready-built display models, and as such they are best used to decorate your den’s shelf or desktop. The purpose of these models is just that - display - and there is little of the intricate detail that’s available in even the cheapest plastic construction kit. But no matter, these are attractive craft objects, and work very well for their purpose.

1930s air racers
Among our favourites from the Airplane Modelworks range are the many single-seaters from the days of air racing in the US, the glory years of which were in the late 1920s and 1930s. Competitor aircraft were often one-off designs, and all were unusual and exotic - and are subjects, it has to be said, that have been very badly served by the plastic kit industry. Scales vary with these aircraft, so unified-scale fans need not apply.

The pictures show, top to bottom:
1 The 1:20 scale Gilmore Oil-sponsored Weddell-Williams ‘Red Lion’ air racer of 1932 has a wingspan of 400 mm (15.75 in).
2 Folkerts SK-3 Jupiter air racer, as flown to victory in the Thompson Trophy air race of 1937, by ace pilot Rudy King. The 1:16 scale model has a wingspan of 318 mm (12.5 in).
3 Gerry Anderson’s Supercar makes a retro-feast for fans of the puppet TV series. A pity though that it has no transparent canopy and Mike Mercury figure at the controls. 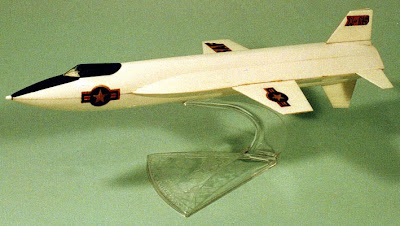 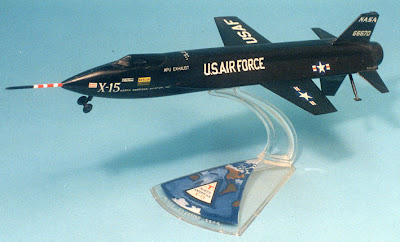 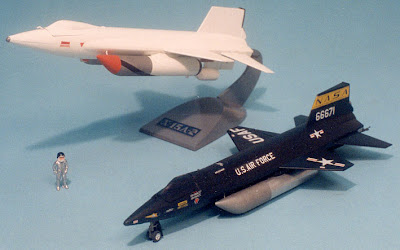 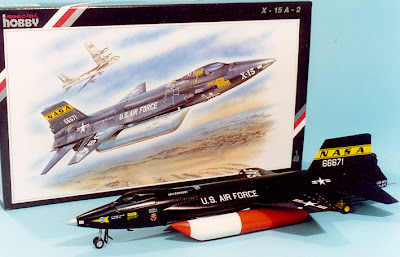 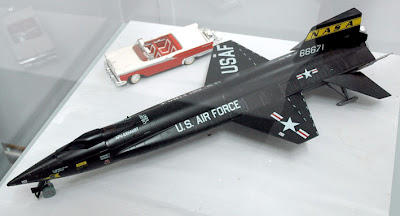 Mat Irvine reports
Today’s the day in 1959 that test pilot Scott Crossfield took the North American X-15 rocket plane on its first flight. This was an unpowered glide only, after being dropped from under the wing of an eight-engined Boeing NB-52, and reached a speed of 840 km/h (522 mph), just ‘one small step’ compared to the X-15’s eventual record of 7274 km/h (4520 mph).

Aurora makes the first X-15 kit
Because of its exotic nature, the X-15 was a natural for model kit companies, especially in the early years when plastic kits were part of a new industry. One of the first such kits came from Aurora in 1959; the real craft had only just been revealed, which makes it understandable that some details were wrong.

X-15 in fit-the-box scale from Revell
After this came Revell’s far more accurate version, one that has survived in various releases for many years. But it had a slight problem in that it was not made to a generally accepted scale. It came from a time when many kits - especially kits from American companies - were made to ‘fit the box’. The companies had a set number of box sizes, and new kits were literally built to fit inside these standard boxes. So Revell’s X-15 ended up being made to 1:65 scale, not that far from the more usual 1:72, but not really close enough for purists.

In fact, it was not until 1987 that Monogram issued the first conventional injection-moulded X-15 kit to the popular international 1:72 scale.

New X-15 kits from Czech model companies
In recent years the Czechs have taken over the X-15 kit world with MPM and Special Hobby (both part of the CMK empire) both issuing kits in 1:72, 1:48, and even 1:32 scale. To date, the X-15 remains the most kitted of all the X-Planes - the number of different issues has reached almost 30.

The pictures show, top to bottom:
1 The first kit of an X-15, from Aurora. It had no undercarriage, was moulded in white plastic, and had spurious markings. Model courtesy the Collection of Andrew P. Yanchus.
2 Aurora’s second X-15 issue had an undercarriage, came in black, and had more accurate markings.
3 The box for Revell’s first X-15. This has lasted the longest of any X-15 kit, and was available until very recently.
4 The first conventional injection plastic kit to 1:72 scale, from Monogram. It was the X15A-2 version, with external tanks. The kit could be finished in black, or the ablative white used for some flights. Of course, that original Aurora ‘in white’ issue wasn’t entirely wrong - although no-one could have known then that white X-15s would eventually fly!
5 The 1:48 scale Special Hobby X-15A-2.
6 The biggest X-15 is the 1:32 scale Special Hobby kit. This picture shows a display at the One Small Step exhibition, currently showing at the Sensation Science Centre, Dundee, Scotland. The 1:32 Gunze Sangyo Ford  Galaxie Skyliner makes a good looking in-scale companion.

You can view a selection of X-15 models at the UK store Hannants here.