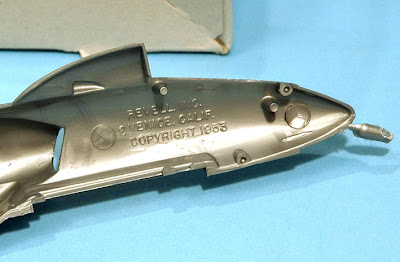 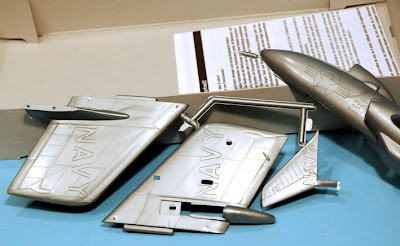 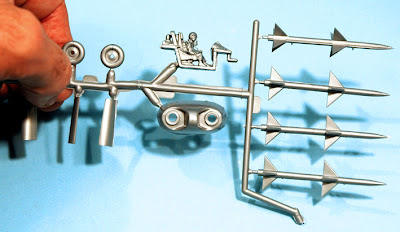 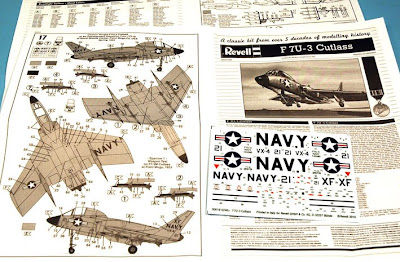 Mat Irvine reports
Revell Germany has recently released another batch of Classic Kits, and this includes one of the oldest originals to be reissued to date, the F7U-3 Cutlass, dating back to 1953. This really does make it an ‘old style’ model kit, from the prominent raised rivets and etched-in decal placements, to the odd 1:60 scale, as it comes from a time when many kits were made to ‘fit the box’ size, not to a standard scale.

Nicely sculpted pilot figure
Moulding on this Cutlass is on the heavy side, which was fairly usual for the period and has little of the fine detail you would expect from a modern kit, but the pilot figure - although moulded to his seat - is actually not too bad. Four early-model Sparrow missiles are provided as armament, though these are fairly basic in shape and detail.

Revell Selected Subjects Program
The idea of these Classic Kits originally came from the American side of the ‘Revell’ name, Revell-Monogram (technically now a separate company), who introduced the idea of the Selected Subjects Program (SSP) in the early 1990s. Here old kits would be reissued ‘exactly’ as they would have been originally, which meant the same box art, decal layout, and reproductions of the original plans, with only odd but necessary changes, such as a bar code. Revell Germany’s Classics Kits follow the same reasoning, except that the boxes aren’t absolutely identical. They certainly use the original box-art - in fact, I have lent the company several original boxes, so they can be scanned for reissue purposes. But this Classic Kits box features a reduced-size Cutlass painting, and a ‘medallion’ logo is prominent on the right-hand side.

New decal set included
However, good news is that, so far as the decals and painting instructions are concerned, Revell-Germany has treated the Cutlass exactly like a modern kit. With the original release, you would have probably got the Stars and Bars, ‘NAVY’ lettering and a couple of serial numbers - perhaps 10 decals in all. Now though, the decal count has shot up to no less than 66! The painting instructions are also comprehensive, giving full details for two aircraft, one for the Air Development Squadron, Point Mugu, California, in 1953, the other for ‘Project Cutlass’ at the Naval Air Station Miramar, Florida, 1954.  These are things you wouldn’t have got in those ‘old days’.

Keep watching for more of these Classic Kits - they are a real eye-opener on the construction kit industry’s progress over the years.

The YouTube video, courtesy ‘jaglavaksoldier’, shows some excellent views of the Cutlass, one of the most interesting-looking US Navy jets from this period.

The pictures show, top to bottom:
1  The box has a main image painted originally by Richard Kishady, who did a number of others for early Revell releases.
2  In case there is any doubt on the original release date, it’s stamped inside the fuselage nose.
3  It looks odd these days, but it was common practise in early US commercial plastic kit to etch in marking outlines, so a young model maker knew exactly where to place decals.
4  The Sparrow missiles are a bit basic, but the pilot figure is nicely sculpted.
5  New for this release is the highly detailed decal sheet and instructions.

You can find the Chance Vought F7U-3 Cutlass here.

*** An update on this Revell Cutlass story will be posted soon - keep an eye open for it...

Reissuing kits isn’t new, but many collectors wanted not only the plastic but the whole paraphernalia that went with the original issue - ...