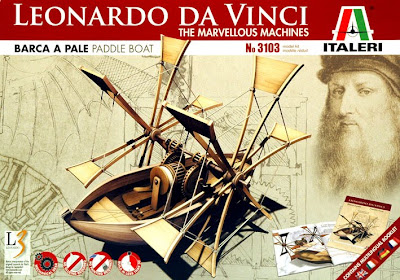 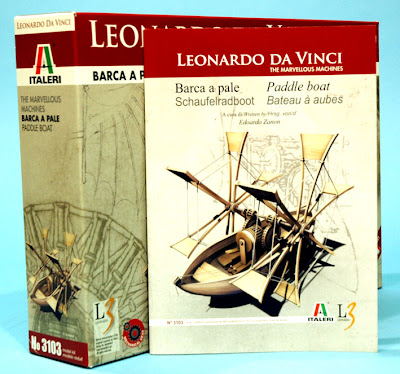 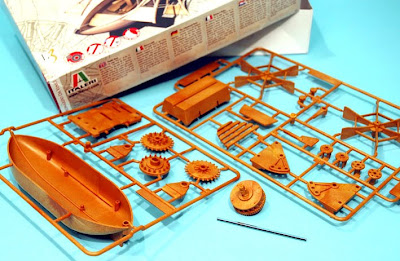 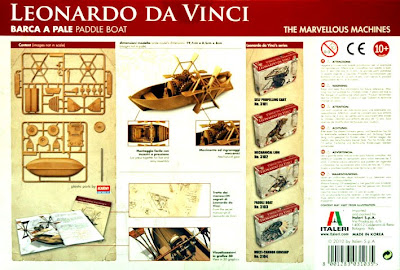 Mat Irvine reports
Things often seem to go in cycles... in the 1970s, AMT, a company better known for its automotive and Star Trek models,  issued three kits based on the designs of that true Renaissance Man, the Italian artist and inventor, Leonardo da Vinci. The AMT kits were interesting in their own way, but soon disappeared from the catalogues, and a rumoured three more never materialised.

New Leonardo kits
But now - several decades on - the subject has gone full circle, with not one but three kit companies announcing new kits of Leonardo’s devices. Revell-Germany has announced a series of, appropriately enough, wooden kits for release later this year, while Japan’s Doyusha is issuing a series in plastic. But first to arrive - in the UK at least - are a pair of Italeri kits, reboxed from a set originated by Academy of South Korea.

Working boat
The Paddle Boat, also known as the Self-Propelled Boat, was a Leonardo idea that was an ancestor of the 19th paddle steamers. The kit actually works, with paddles that rotate, powered by a pre-assembled clockwork motor. It’s a ‘snap-kit’ that needs no glue, and components are pre-coloured in a brown ‘wood’ shade.

Perhaps the nicest thing about the kit - and this echoes ‘educational’ kits of old - is that you get a comprehensive full-colour illustrated booklet. It’s printed in English, German, French and Italian, and shows Leonardo sketches, other boat designs he created, and various models built for museum displays.

An early automobile design?
Italeri’s other currently available Leonardo kit is the 'Self Propelling Cart', a da Vinci design that predated the first working automobile by hundreds of years. With two more Leonardos in the works, all in all it’s a highly appropriate series from Italy’s premier model company.

The pictures show, top to bottom:
1  Box top.
2  Comprehensive booklet.
3  Components of the kit, with the clockwork motor at lower centre.
4  The back of the box is almost as comprehensive as the supplied booklet. It shows the three other models - Self-Propelling Cart, Mechanical Lion, and the Multi-Cannon Gunship, Leonardo’s tank design.