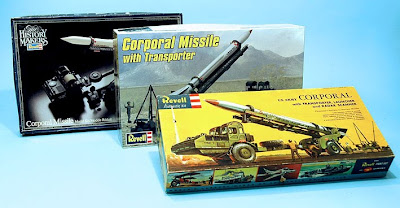 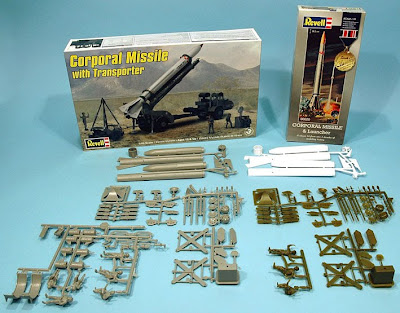 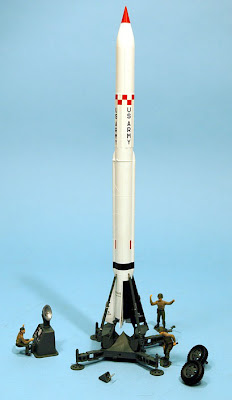 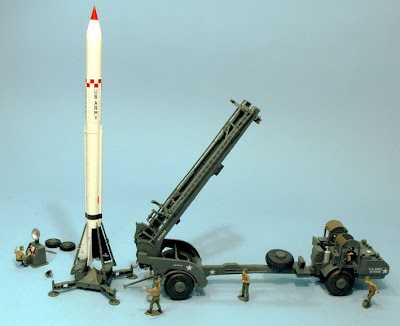 Mat Irvine reports
From around 1955, one of the mainstays of the US Army’s military might in Europe was the surface-to-surface Corporal ballistic missile, the first such to carry a nuclear warhead. The 139 km (86 mile) range Corporal looked sleek and functional, but in reality was very unreliable and took a large number of personnel to ready it for launch. But the Corporal did prove an ideal subject for the early Revell company’s growing range of space and missile kits, and it now stars as another of Revell-Germany’s Classic Kit range reissues.

Uniquely, Revell issued the kit in two forms, one of which consisted of the missile and launcher, with three crew and a stand-alone tracking station; it’s this kit that Revell-Germany has reissued, using the original box-art as a centrepiece, with the ‘Classic Kits’ medallion added.

These types of kit had to have ‘working parts’, so the launcher’s support arms were designed to be foldable, the transporting road wheels can be unsnapped, and support pads placed. So, position the missile for launching (or glue if you want to avoid the danger of it falling over!), add the unrealistic number of crew (three is something of an underestimate - Corporals needed about 250!), and you have a classic icon of the Cold War.

But as noted, the Corporal was issued in two forms. The other kit came with the still-futuristic looking Transporter-Erector, as well as the missile and launch pad, and this kit has been reissued separately by Revell-Monogram.

This is a pure reissue, as R-M has not put it in the SSP range, (which still exists, though much reduced), with a built model on the box. This is only the third outing for this kit - the original from 1959, the History Makers Series II in 1983, and now this one in 2010. The Transporter-Erector has even more ‘working features’- from the clamps that hold the missile in place, to the gearing that moves it through 90 degrees for placement on the launch pad. The pad itself can be hitched up behind the main vehicle.

As an intriguing aside, both kits are to the original scale intended for military vehicles, 1:40, as used by Revell at that time, and others such as Adams. The only real alternative then was 1:32, which was used by Renwal. The now common 1:35 scale for AFVs had yet to appear - though when it did, it wasn’t from a Japanese manufacture, as I suspect is usually assumed. In fact, it was almost certainly first used by Monogram. However, this now almost universal use of 1:35 led to an incorrect scale being put on the Revell-Germany box, which states 1:35, not 1:40.

The pictures show, top to bottom:
1  Three Transporter-Erector kits, with the original (and best-looking) box at right.
2  A selection of parts from the reissues, laid out side by side. Note the different shades used for components.
3  Revell-Germany’s Corporal, ready for flight.
4  Revell-Monogram’s Transporter-Erector builds into an impressive piece of hardware.
5  The R-M Transporter-Erector with Corporal awaiting a launch decision.