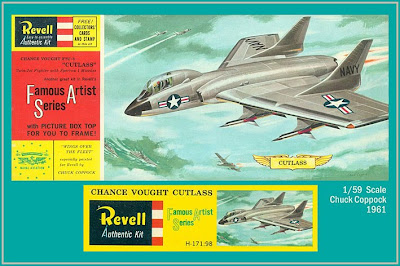 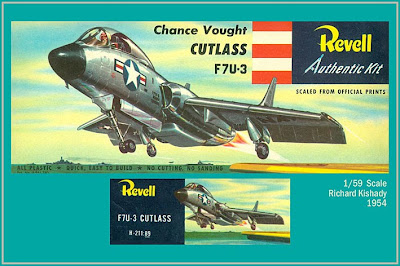 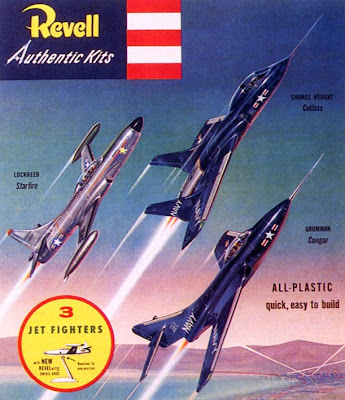 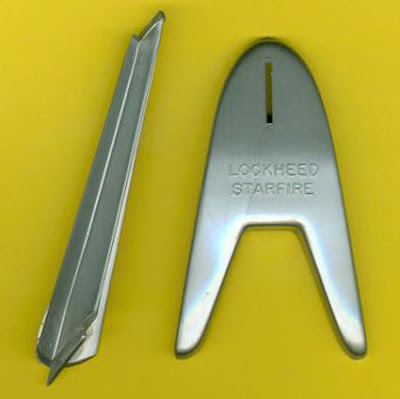 Mat Irvine reports
Old friend Andy Yanchus in New York, past Project Manager at Aurora, and a kit historian - with a much wider knowledge than me - points out that the Revell Germany Classic Kits reissue of the Chance Vought Cutlass F7U-3 (see SMN July 3) is not from the actual original. The very first version Revell tooled up was the F7U-1, which had a more pointed nose. In addition, and as was common with these very early kits, it had no cockpit or undercarriage. However it did have a stand, a simple two-piece design moulded in the same colour as the main parts.

Added details
However, Revell soon upgraded the Cutlass, along with the two other fighter kits it manufactured, the Lockheed Starfire and Grumman Cougar. These featured ‘new-fangled’ details, such as a cockpit and undercarriage. At the same time, the Cutlass tooling was changed to the later version, which had the more rounded nose.

Revell swivel stand
At the same time, Revell replaced the original stands with a transparent type with swivel top that would be standard-issue with all its aircraft kits for a good number of years. These clear stands were made in what are generally called ‘family moulds’, as the same parts can be shared by a number of different kits. In addition, by eliminating the original stand, it allowed Revell room in the tool to add the new landing gear parts and detailed pilot figure. The Sparrow missiles didn’t actually arrive until the third release of the kit, but for this release the swivel stand was omitted.

Mixed-up kit
This new-release Classic Kit therefore mixes up the new details and box art from the second kit, plus the missiles, and the fact that it doesn’t have a stand, from the third release. Now add in the brand-new decals, and you have an interesting melange!

The pictures show, top to bottom:
1  The Cutlass now issued in Revell’s ‘Famous Artist Series’, noted by Andy as Chuck Coppock, with a 1961 issue date.
2  Richard Kishady’s artwork was far more dramatic, as were his many other excellent kit-box paintings.
3  Revell’s second issue of the three-fighter set. Complete sets are usually rarest (aka ‘most expensive’), as they almost always get broken up into their component parts.
4  A two-piece stand of the type that would have come with the first Cutlass kit. This one belongs to the F-94C Starfire but, with an appropriate name change, they would have been the same.

Thanks to Andy Yanchus for the information, and for photographs 1, 2, 4.

You can view the Revell Cutlass here. Note that the 1:60 is not quite right - careful calculation puts the actual scale at nearer 1:59.

There’s more on the artists Revell has used here.