INSIDE A CHINESE TWIN-JET AIRLINER 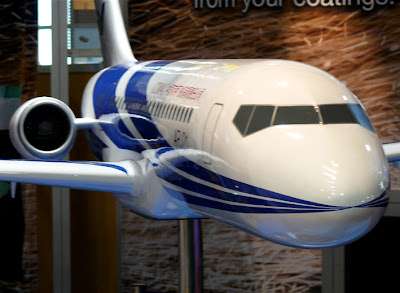 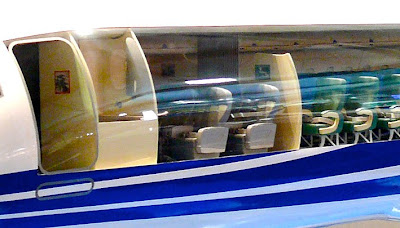 David Jefferis reports
Talking of airliner model interiors (yesterday’s post) we had already spotted such a thing at the Farnborough Air Show recently. So here are three pictures taken at the stand of the Chinese manufacturer, Comac. It’s a metre-plus long display model of the new Comac ARJ21 twin-jet.

Looking inside
The ARJ21 model has little of the ultrafine detail you normally expect of an injection construction kit, but the port side is transparent plastic, which allows plenty of interior features to be seen - mostly, of course, the rows of seats that fill the length of this Chinese-produced machine. If you look at the closeup (bottom pic above), there’s even a wall-hanging picture - perhaps a safety instruction poster - on the right of the entrance portal.

New aspects to a familiar design
The real thing is named the Xiangfeng (Chinese for ‘Soaring Phoenix’). Several prototypes have flown, and the number four aircraft is due for delivery to Chengdu Airlines in late 2010. The ARJ21 is not a completely new design though - instead of starting from scratch, Comac shortened the development process by upgrading the old McDonnell-Douglas DC-9, for which it has the tooling and manufacturing rights. The new fuselage is very similar to that of the DC-9, but there is a brand-new wing, with fuel-saving winglet tips designed by the Russian Antonov company. These and many other changes are resulting in an aircraft that is much more efficient than the original DC-9.

Airliner variety
As you can see, there’s quite a bit of interest inside the fuselage of any airliner, so SMN’s view is that a few more cutaway airliner kits would certainly add some much needed variety to the subject, and keep model fans happy too.