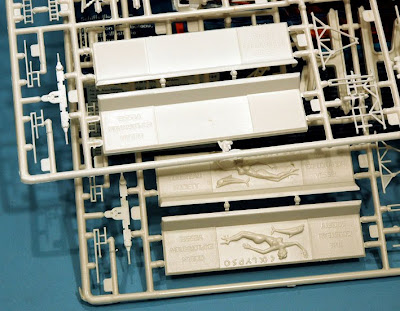 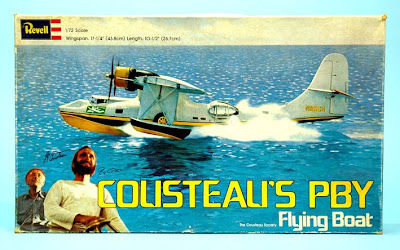 Mat Irvine reports
Revell Germany has just issued the ‘Ocean Exploration Vessel’ and if it looks like the original Calypso ship of Jacque Cousteau, made by Revell Inc way back in 1976, that’s because it is!

The wooden-hulled Calypso has had a varied career. She was built and launched by a US yard in 1942, going into service as a minesweeper with the British Royal Navy the following year. After World War II ended, she gave service as a ferry in Maltese waters, then wa finally acquired by the Cousteau organisation in 1950, to be refitted as a floating laboratory.

Birth of the Calypso model kit
Revell wanted to produce a kit of the Calypso, but - according to Tom Graham’s book Remembering Revell Model Kits - it took quite a bit of persuasion. Eventually Royle Glaser, wife of Revell’s founder, Lew Glaser, organised a working breakfast with Jacques-Yves and Francine Cousteau. They realised Revell was serious about the proposal, and that sealed the deal.

The ship and the plane
The company then produced an extremely comprehensive 1:125 scale kit, which besides the main vessel, included mini subs, Zodiac inflatables, runabouts, a Hughes helicopter, diving saucer, divers, diving bells, shark cage - and even sharks.

Revell also converted its existing PBY Catalina flying boat into the Cousteau version, though this was in the bigger 1:72 scale. Even so, the two kits made an extremely attractive set, and a 16-page booklet was included with the Calypso. But even after all this, the kits did not sell that well - a lack of guns never seems to help a model kit’s sales, and unfortunately Jacques Cousteau’s son, Philippe was killed in a Catalina crash-landing, leading to the kit’s rapid removal from the Revell list.

Calypso sails again under a new name
The new issue removes all connection with the Cousteau Society, though the only visible sign is the removal of the Calypso name from the plate on the stand - otherwise everything is ‘as it was’. The whole kit is moulded in white plastic, with a few clear parts for the helicopter cockpit, and measures some 336 mm (13.2 in) long. Given its age - more than 30 years old - the kit hasn’t survived too badly. There are a few signs of ‘flash’, created where the tooling halves don’t fit together quite as precisely as they did when new, but it is minor and can be removed easily with a modelling knife. The scale of 1:125 is perhaps not a standard ship-model scale, but Heller uses the scale for its space kits, so there is an ‘exploration’ aspect in common.

The pictures show, top to bottom:
1  The new Ocean Exploration Vessel issue from Revell Germany
2  An original 1976 issue of the original Calypso. Unfortunately the ship’s travel medium - water - has damaged the box-top on the left. Ironically, kit plastic is inert to most things, but water is an extreme hazard to anything paper-based, whether it’s box, plans or decals.
3  The one real difference between old and new kits - the name plate has the Calypso mention removed.
4  The Cousteau PBY, also dating from 1976.