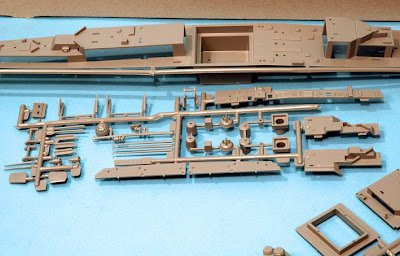 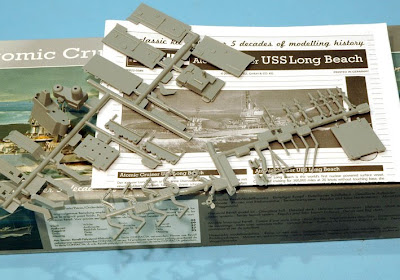 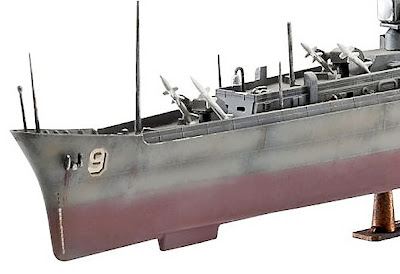 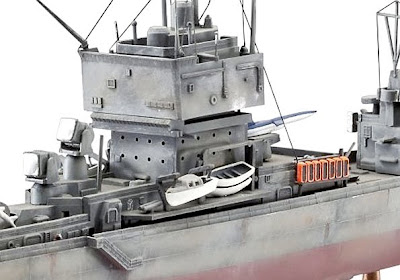 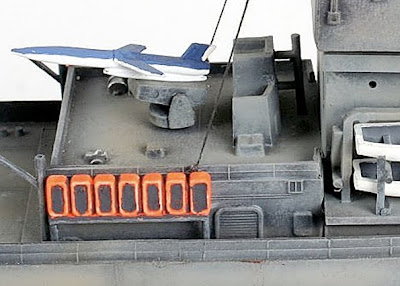 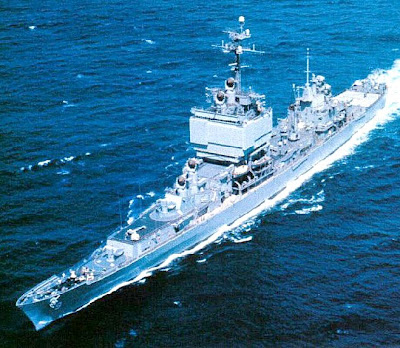 Mat Irvine reports
The USS Long Beach is another recent Revell-Germany issue in its Classic Kits range. The Long Beach is a significant ship in that it was the first - and still only - nuclear-powered cruiser, the first all-new cruiser built for the US Navy after WWII, and the first that was armed primarily with guided missiles, though she did have two 5-inch guns amidships and could launch torpedos. Long Beach was also the only one ever built in her class, so therefore remains unique.

Regulus 2 cruise missile
The Revell kit dates from 1960, the year after the real ship was launched and features two nuclear reactors, one for each propeller shaft, and three types of missile. There are twin launchers forward for the medium-range surface-to-air (SAM) Terrier, one twin launcher aft for the long-range Talos SAM, while amidships is a Regulus 2 cruise missile, positioned on a launcher ready for takeoff. It’s not clear that the real ship actually carried the Regulus, but it certainly looks good on this model. In any case, later refits provided updated weapons such as the Standard, ASROC and Tomahawk missiles. The Long Beach was eventually decommissioned in May 1995, and still awaits dismantling and reactor recycling.

Revell kit issue dates
As with most Revell kits (in fact, most kits - period) the model has been reissued several times. The first issue was in 1960, then various ‘series’ issues in 1962, 1964 and 1968. The 1988 reissue was re-engraved inside the hull with that year as the copyright date and a new kit reference number.

Revell fit-the-box scale
Typical for its time, the Revell Long Beach is not to a standard accepted scale for naval ships, but made to ‘fit the box’. However something slightly odd has happened to the scale. The new issue lists it as 1:460 scale, whereas originally it was introduced as being made to 1:508 scale. However, a hull-length check shows the actual ship to be 220m (721 ft) long. The model length is 432 mm (17 in) which - doing the math - is about 1:509 scale, so the initial reckoning was near spot-on. Perhaps someone at Revell-Germany mis-keyed the numbers.

Is the Revell USS Long Beach worth building?
As for the kit itself, it’s a pretty good one, especially bearing in mind its age. For modelmakers interested in the Cold War era, the model is pretty much a must-have, expecially as those missiles are so neatly moulded; the Regulus in particular looks good at this scale, even if it never went to sea on the Long Beach. You don't have to include the Regulus anyway. The reactors are well moulded too, and all components fit reasonably well. When assembled and presented on the neat included stand, the Revell USS Long Beach will make a handsome desk-top item, with the one proviso that, thanks to the odd scale, it’s really best as a stand-alone display piece.

The pictures show, top to bottom:
1  The latest box design for 2010.
2  An earlier issue, this one from 1988.
3  Kit components that show the large hole for the nuclear reactor in the main deck, with parts for the Westinghouse reactors laid out just below.
4  More components, including Terrier missiles at far right.
Pictures 1-4 courtesy Mat Irvine.
5-7  Closeups of the assembled model, including a look at that Regulus.
Pictures 5-7 courtesy Revell.
8  The real thing at sea. Her square superstructure contained various experimental radar systems.