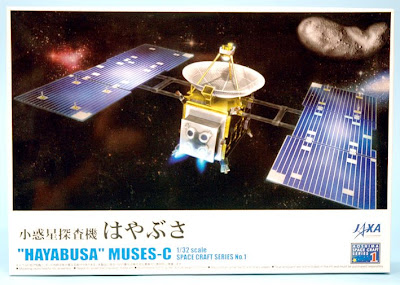 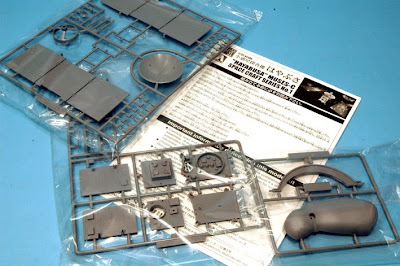 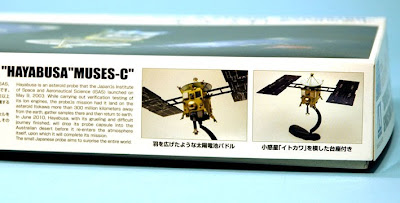 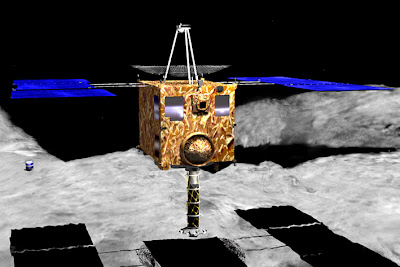 Mat Irvine reports
Just over two months ago, on June 13, 2010, the Japanese spaceprobe Hayabusa (original name MUSES-C) returned a small sample container back to Earth. Having spent seven years in space - three more than planned - Hayabusa had finally completed its unique task, to rendezvous with the asteroid Itokawa, hover there, grab a soil sample and return it to Earth.

Hayabusa mission doubts
The spaceprobe appears to have done most of these tasks, though there is still some doubt as to whether the return samples (the container landed in the Australian outback, near Woomera) are actually from the asteroid. However, overall it was still an amazing mission.

Hayabusa model kit
Also rather amazing is the fact that the Hayabusa mission inspired Aoshima to make a kit, even more so as this is only the fifth (that’s right - number five) unmanned spacecraft ever to have been made as a conventional plastic kit! I do have to add the rider that there have been a number of other non-plastic kits, made from resin, card, and photo-etched metal.

Made to 1:32 scale, the Aoshima kit includes a wealth of full-size probe detail, from the central bus, twin solar panels and ion engine to the high-gain antenna dish. You get a stand in the shape of the very oddly shaped asteroid Itokawa, and also included is the tiny - very tiny - sub-probe Minerva that was suppose to land on Itokawa, though sad to say, this part of the mission failed. Minerva could almost be made as a 1:1 scale kit - it was just 100 mm (3.94 in) tall, and 120 mm (4.72 in) in diameter!

Hayabusa kit cancelled.
But perhaps the oddest thing about the kit is that Aoshima proudly states on the box ‘Space Craft Series 1’ - indicating more to follow - yet almost immediately discontinued the kit! Aoshima usually reintroduces its models at a later date though, so let’s hope it happens in this case.

It’s frustrating, but some kits may still be available. The Hayabusa featured in my pictures above was kindly supplied by Hobby Link Japan, so it’s worth having a look here, where you can also see a video and model shots.

Other space models, both fact and fiction, are available here.

The pictures show, top to bottom:
1  Box top also shows the older MUSES-C name, derived from Mu Space Engineering Spacecraft C. Incidentally, Hayabusa is Japanese for Peregrine Falcon, and is also the name for the superfast and highly desirable Suzuki motorbike.
2  Photos of the built model on the side of the box.
3  The parts: note the peanut-shaped stand, representing the oddly-shaped asteroid Itokawa.
4  CGI rendering of Hayabusa in hover mode above the asteroid surface.