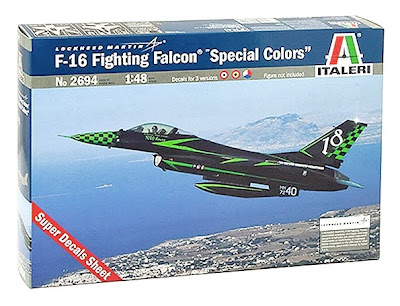 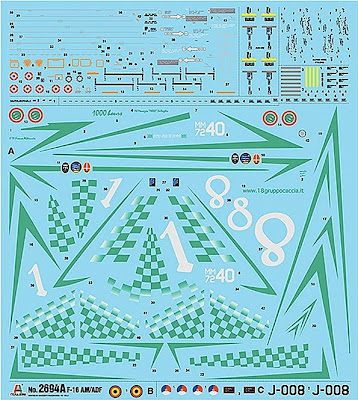 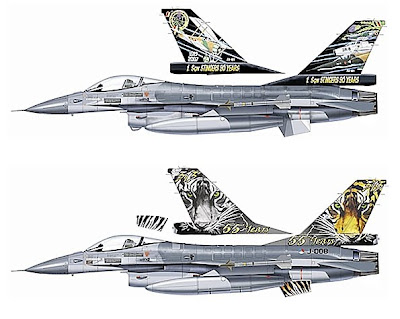 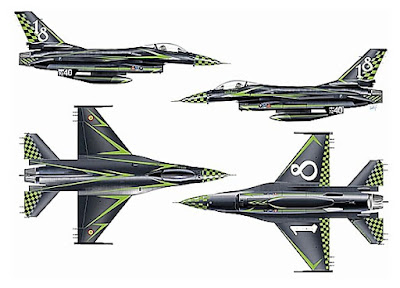 David Jefferis reports
The first production-standard F-16 fighter jet flew 36 years ago this month, and the type is still in front-line service across the world, with more than 4400 having been built, and customers still lining up for new ones. The basic design has been improved vastly over the years, especially where electronics and mission capabilities are concerned, but the basic shape and size remains much the same, a testament to the General Dynamics team that designed the aircraft back in the 1970s.

New markings from Italeri
Model manufacturers number the F-16 as one of their most popular modern jet subjects, and new kits continue to be released. This time it’s a very neat Italeri 1:48 scale offering, and it’s been given an excellent set of markings, called ‘Special Colors’ on the box. The decals are quite excellent, neatly and accurately printed, and give you a choice of tails - we rate the brooding tiger especially - or green-and-black chequerboard display markings.

In the box
As for the kit itself, Italeri claim it’s ‘new’ but we’re not quite sure how much of the kit is actually brand-new tooling. No matter - the parts are cleanly pressed, with tidy detail throughout, though a word of warning. The F-16’s canopy is a frameless design that gives the pilot unparalleled all-round vision, but the modelmaker has to be very careful indeed when removing this clear part from the runner. Take your time, use the sharpest blade possible, and be prepared for some gentle polishing to keep that canopy sparkling clear.

On the video
The aerobatics on the video were flown in the grey and claggy skies of Europe by Belgian Air Force Commander ‘Mickey’ Artiges of the Belgian Air Force. Note the condensation trails coming off the leading edges of the wings as Artiges pulls gee in turns. It’s an inspiring display of expert flying, filmed by the Euro video producer Pro-Wing.