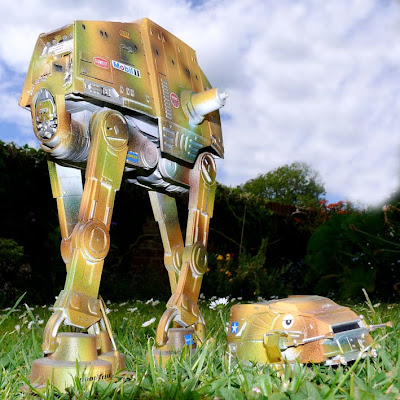 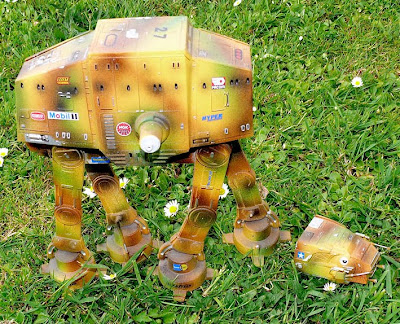 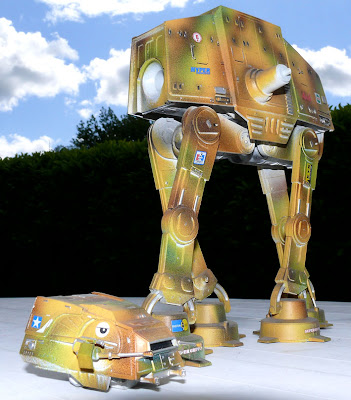 David Jefferis reports
The Evil Empire’s prime assault weapon during the Battle for Hoth, as featured in the Star Wars movie Episode V - The Empire Strikes Back, was the four-legged AT-AT, or All Terrain Armoured Transport.

The AT-AT has been a favourite with sci-fi fans ever since, and is just one of a range of walker designs created for the Star Wars universe. Conceptually the AT-AT was a heavily-armoured assault machine, armed with lasers and blaster cannon, and with room inside to carry half a dozen speeder bikes and up to 40 Imperial Stormtroopers (surely the worst shots in the history of shoot-em-up movies).

In the model world, the best kit currently available is from Revell, and this makes up into a fair representation of the Star Wars machine. There are toy versions available as well, and these have the ‘play value’ demanded by the younger market - and it’s one of these, from Hasbro, that features in the movie we show above. Crazy but cute, as they say.

Back to scale modelling, and at SMN Towers, we’re busily doing a hack-n-chop conversion of the Revell kit, turning it from an AT-AT, into an AT-AA (Armoured Attacker). The camo paint job makes the AT-AA suitable for operations on a jungle planet, with extra weaponry to take down the defences of rebel forces. Extra weapons demand more ammo storage and power systems, so the body is packed with these instead of seating room for those Stormtroopers. The vulnerable AT-AT neck joint has been replaced with a simple armoured cylinder, making the AT-AA a more difficult target to damage, while underbody electro-nets stop a repeat of the lasso tactics used so successfully by rebels in their snowspeeders at the Battle of Hoth.

The pictures show the SMN AT-AA halfway through conversion. We’ll show the finished thing (minus the experimental drag racing decals) when she’s ready for power-up and blasting those rebs to bits!

The pictures show, top to bottom:
1  Still-frame from the 1980 space-opera movie The Empire Strikes Back.
2-4  The SMN AT-AA halfway in the kit-bashing process.

The Revell AT-AT is available here.

And a smallish diecast version on a mini-diorama base here.