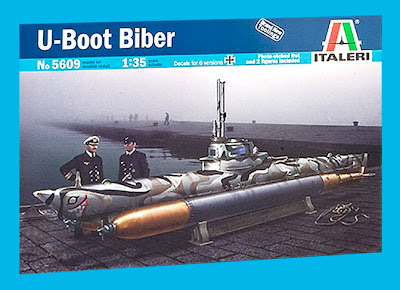 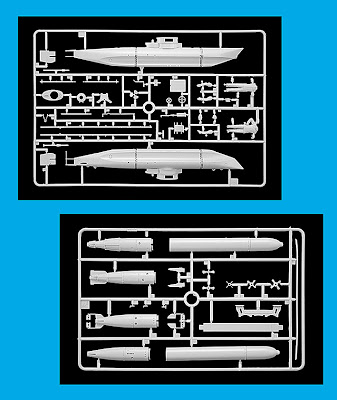 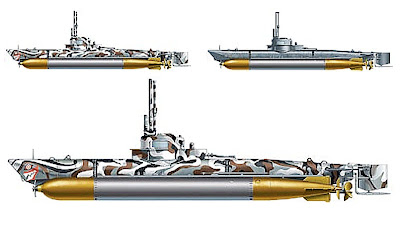 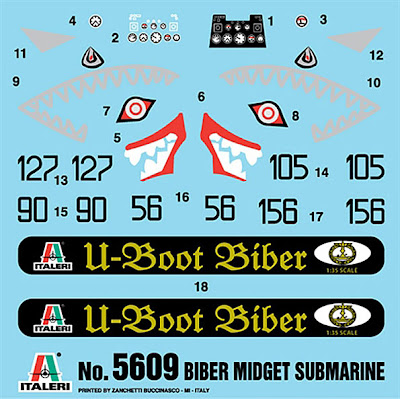 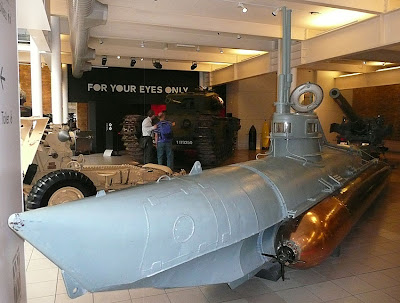 SMN report
Italeri’s latest 1:35 scale nautical kit is the neatly produced Biber (‘Beaver’) one-man midget submarine from World War II. To this big military-model standard scale, even the Biber works out to a fair size in model form, in this case some 186 mm (7.3 in) long. It comes with two well-sculpted figures, as well as decals for three different subs, and a small etched-metal fret with super-detail parts.

Biber on view at the Imperial War Museum
There are quite a few Bibers on display in military museums across Europe - the one pictured above is on view in the UK’s Imperial War Museum, London. It’s a place well worth visiting, and if you build the Italeri Biber kit, seeing the real thing complete with its quota of lumps, bumps, scrapes, dings and dents, will allow you to add those extra details to take the Italeri sub from smooth-but-a-bit-dull ‘stock’ to knocked-about-and-real ‘superb’.

Biber armament
In service, the Biber could carry two 530 mm (21 in) torpedos or a pair of mines, but the tiny U-boat was introduced late in the war and never became a big threat to its primary target, Allied coastal shipping. It had a limited range of some 185 km (115 miles) and could manage a speed of less than 10 km/h (6.2 mph) underwater. Over 300 Bibers were built, but they met with little success in combat operations, and most were damaged or sunk by Allied forces.

One-man Biber operations
Spare a thought for the man at the Biber’s controls - military operations generally lasted for one or two days, and the pilot-operator had to stay on combat-alert throughout the mission. To help do this, he refuelled on a diet of caffeine-boosted chocolate, or downed tablets of D-IX, a cocaine-based drug brewed up by Nazi scientists to keep him wide-eyed and awake. Apparently, earlier tests with D-IX on full-pack carrying troops had resulted in non-stop marches for anything up to 90 km (55 miles) before total collapse.

SMN note - A couple of the pictures look somewhat squashed, which is a software issue... we'll see what can be done. Meantime, if you click on any pic, the usual enlargement will show it undistorted.