SPIT AND POLISH SHINES UP A MUCH-LOVED WARBIRD 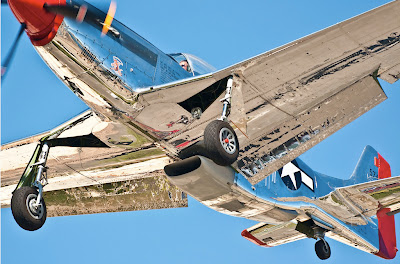 SMN report
Seeing that Shigeo Koike P-51 Mustang painting coincided with the pic above arriving at SMN Towers. It came unannounced, so if you're the owner or the photographer, do let us know so we can give you a credit. The aircraft - a P-51D Mustang - just has to be the shiniest 'Stang we've ever seen. Click the pic to enlarge and you'll be blown away by the sheer lustrous beauty of shiny metal, which makes my Sunday afternoon cutlery-cleaning sessions with Silvo look somewhat pathetic. The gleaming Mustang is also a reminder that the type has to be just about the most-modelled aviation subject ever, even if the Supermarine Spitfire takes the podium in some markets.

Museum grade replica
The Mustang is not a just popular subject with serious IPMS types and more casual model makers - the folks at P51 Mustang Models will make you a museum-grade replica for a fee. On the kit front, which one is best? Well, that's an argument that could run and run, with pros and cons for every entrant in the market. Still, it's fair to say that there is not a real rip-yer-hair-out dud out there.

A big one from Airfix
Our own favourite is the old 1:24 scale Airfix model, not so much for its overall accurancy, but for the boldness of Airfix in bringing out a mammoth kit at a time when even 1:48 was considered on the big side. Ah, nostalgia!