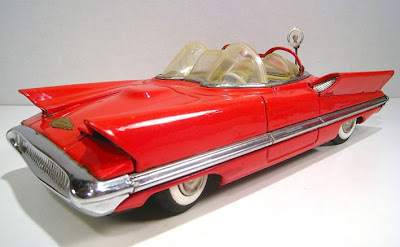 SMN report
We inspected the two-piece solid wheels sported by Revell’s Lincoln Futura, and mentioned that the tyre elements were not made of rubber, like most kits these days. Well, that's not quite right and here’s a correction from the acknowledged expert of scale auto models, Mat Irvine, who reminded us that almost all model tyres are not rubber at all, they’re usually made of vinyl, a soft plastic compound.

The styrene killer strikes
Apparently, the composition of some early vinyls could attack styrene and literally melt it, and Mat has a few examples of this. In Mat’s words: “I recall AMT for one went to styrene for many of its tyres in the 1970s for this very reason and only returned to vinyl in later years, when the formula had been changed. Airfix had the same trouble with the tyres in its James Bond DB5 kit, and with the tracks for many of its tank kits.”

Austin-Healey model kit
Mat continued: “This could have applied to the most recent reissue of the Revell Germany Austin-Healey 100-Six, though thankfully this reverts to the original styrene wheel-tyres combo for the latest release. Incidentally, I supplied an original box for Revell to photograph as artwork for the update.”

“Apart from the fact that this was the original format, the replacement vinyl tyres and chromed wheels used on later issues (as of course they were the 'in thing') were awful (and I don't mean 'full of awe...'). The originals were far, far better, having very finely moulded wire wheels, which with appropriate paint, look absolutely the part.”

More on the Lincoln Futura
Back to the Lincoln Futura, the pix above are a couple of nice finds we thought you’d like to see. The 280 mm (11 in) long tin toy was made by Yonezawa of Japan, and dates back to the mid-late 1950s. Present value is around $800.00 USD (£500.00 GBP) for a tip-top example, and worth every note we’d say. Somewhat cheaper is the neat Johnny Lightning 1:64 scale model, which was issued as a Limited Edition. Even so, with careful shopping around, you can pick one up for just $15.00 USD (£9.40 GBP).

Here’s a range of tasty tinplate items, though we suggest you ignore the cake tins, unless you like baking of course here.