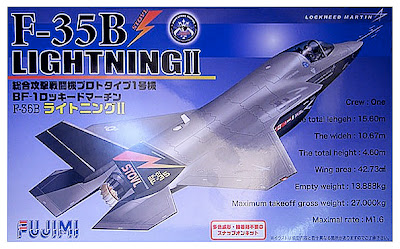 SMN report
No sooner did we do the F-35 piece below, when we ran across the recent Fujimi 1:72 scale F-35B STOVL version. It’s a multi-colour kit, something along the lines of the old Matchbox releases, though it has to be said, Fujimi’s palette is far less alarming than the kaleidoscope of inappropriate shades that Matchbox dreamt up.

A mixed bag from Fujimi
It’s an important product, as it is about the first one that approximates the production-standard machine, though doubtless details will still change between now and squadron service. The engine is moulded in a rich dark metallic shade and has extremely fine detail, so top marks there Fujimi. Less entrancing are the weapons, which are fairly basic - serious model fans will go straight to the bits box or to aftermarket suppliers.

The Fujimi model is becoming available now, from model stores and online suppliers. There’s an in-depth review of what’s in the box, with heaps of closeups and comments for and against, from model maker Drewe Manton here.
Email ThisBlogThis!Share to TwitterShare to FacebookShare to Pinterest
Labels: F-35B, Fujimi
Newer Post Older Post Home