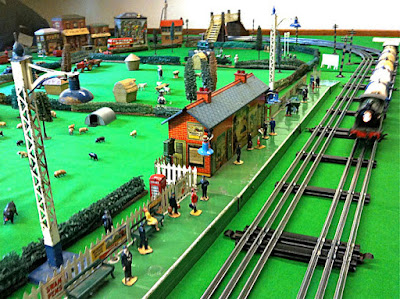 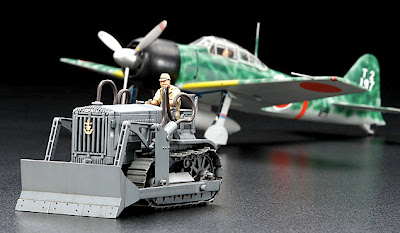 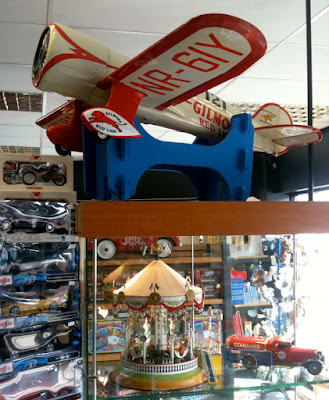 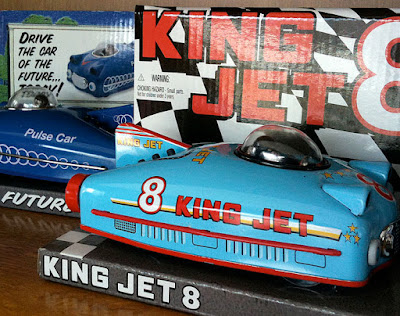 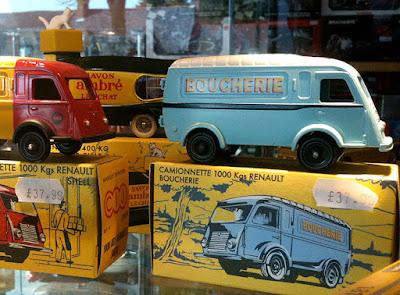 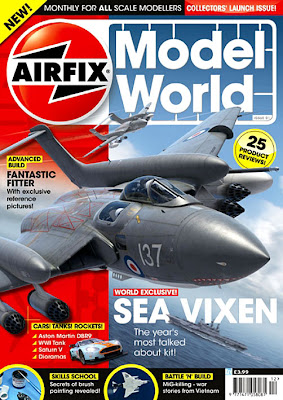 SMN annual review
How to condense a whole model year into a readable piece? Impossible without filling half of Wikipedia! So here’s quickie scoot through five items that entertained us, big and small... In February we clomped through the last of the winter snow to a Collector Fair near Oxford, UK. There were the usual stalls sprinkled with tempting treats, but star of the show was the splendid O-gauge three-rail electric layout.
Of course, items like this are hardly ‘true scale’ - they are (or were) a half-way point between a non-scale ‘toy’ and a true-scale ‘model’ - but you can enjoy them for what they are - immensely pleasurable objects that also have the benefit of action, controllability, and in Kidlington anyway: lots of lovely clickety-clack noise!
The trackside accessories were a joy to behold - for example, many of the buildings were re-used decorative biscuit tins, and very fine they looked too. The station was a piece of original tinplate railwayana, and looked terrific, as did the tin platform, even if it was sleek and shiny, unlike the real thing. All in all, marvellous stuff.
Tamiya Bulldozer
In March we fell for Tamiya’s delightful 1:48 scale Komatsu bulldozer kit. When assembled, it’s a dinky little thing, just 75 mm (2.9 in) long, but the detail is oh-so-fine, with components such as hydraulic lines, front grille, suspension system and, of course the ’dozer blade, all well reproduced.
A pity perhaps that Tamiya decided to mould the tracks as one-piece non-moving plastic parts, but the box contained a decent driver figure, who manages to grip the steering controls realistically. An unusually handsome feature at the front was the grille badge, included as a metallized decal.
Shakespeare country
Come April, we were in Stratford-upon-Avon, home of William Shakespeare, and nowadays Much Ado About Toys (MAAT), a treasure trove of miniature delights that range from plastic kits to tinplate collectibles.
Schylling’s tinplate products were well represented at MAAT. These are modern takes on nostalgic and retro themes; for example, the palm-sized ‘King Jet’, just the sort of thing I’d like as an alternative to my usual economy-class airline ticket!
MAAT’s collection of CIC diecasts from France had attractive retro lines, with offerings like a Renault Camionette or a one-off Watermans Ink promotion vehicle from the 1950s.
Farnborough Air Show
At the UK’s Farnborough International Airshow in July, there were plenty of models on display, both in the trade halls, and for sale in exhibition tents out in the sunshine. Trade hall models came large and small, and were fascinating for their variety, from rockets to rotorcraft.
Models for sale showed just how popular readybuilts have become - it was almost a clean-sweep for them, with only a few construction kits on display. The incredible levels of detail now going into metal kits impressed us - a Sukhoi Su-27 had amazingly fine panel detail, while a Hobby Master Douglas Skyraider had a jewel-like sliding canopy, and a complete range of ordnance slotted neatly into a shiny plastic case, waiting to be hung under those straight wings. Totally ace.
Airfix Model World magazine
November saw the return of an old friend, Airfix magazine, this time packed with colour, a bigger format, new name, and a new publisher.
Content in the launch issue was wide-ranging, leading with the just-released Airfix 1:48 scale Sea Vixen kit, with detail shots that included the neatly-modelled observer’s cockpit and radarscope. Backed up by other features, the new mag made a strong start - and of course, with a ‘Space Build’ feature by SMN’s own Mat Irvine, it had definite class on its side!
The pictures show, top to bottom:
1  Kidlington’s O-gauge tinplate trains.
2  Tamiya 1:48 scale bulldozer, with Zero fighter behind.
3  Tinplate King Jet at MAAT.
4  CIC Renault van to 1:43 scale.
5  Pakistani JF-17 Thunder jet fighter model on display at Farnborough.
6  Airfix Model World magazine launch issue, November 2010.
Pictures Scale Model News, except Komatsu Bulldozer courtesy Tamiya.
Email ThisBlogThis!Share to TwitterShare to FacebookShare to Pinterest
Labels: Airfix Model World, CIC, Farnborough, Komatsu bulldozer, Much Ado About Toys
Newer Post Older Post Home