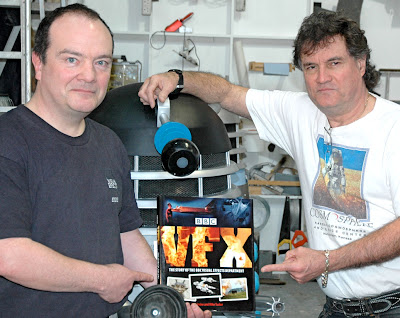 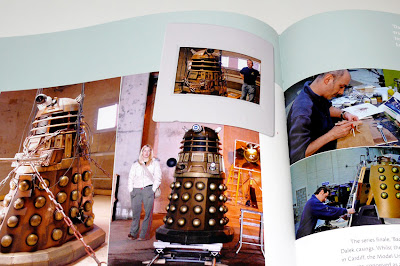 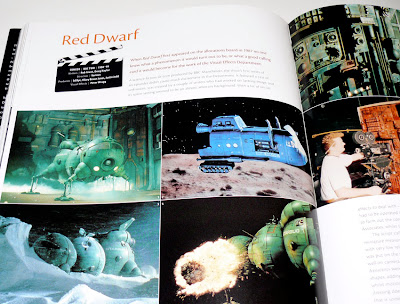 David Jefferis turns the pages
First things first - BBC VFX is a thundering great tome that tips the scales at not far south of 2 kg (4 lb) and is an encyclopedic 240 pages from end to end. And in fact, that’s just what it is - a show-by-show encyclopedia detailing the work of the BBC Visual Effects (‘VFX’) Department down the years.
SMN contributor Mat Irvine
The two authors behind BBC VFX are long-time experts in the VFX field. We know Mat well for his contributions to SMN, and for his droolworthy Model Museum, packed with examples just about every kit ever made. Mike Tucker worked at the BBC until 2003, and now runs his own company, The Model Unit, based at Ealing Studios near London.
Daleks to Moonbase 3
So what’s between the covers of BBC VFX? Quite simply, the most complete listings, descriptions, and behind-the-scenes information about virtually every BBC TV show that’s featured the Department’s expertise. Some of these are world-renowned - Doctor Who and the Daleks, for example; others are less well known - I’d never even heard of the 1970s series Moonbase 3, much less seen a show. But famous or not, Mat and Mike have put together a showstopper of a book that is packed with fascinating facts, whatever the TV show they are talking about.
Read more »
Email ThisBlogThis!Share to TwitterShare to FacebookShare to Pinterest
Labels: BBC, Bernard Wilkie, dalek, doctor who, mat irvine, Mike Tucker, VFX 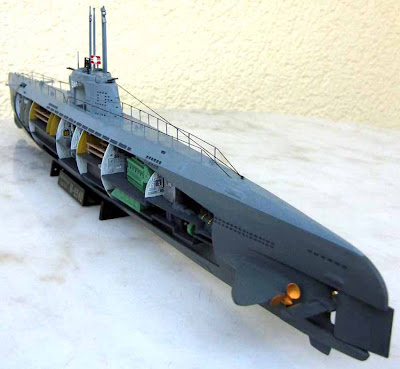 1:144 scale model makers can home in on the latest Revell nautical kit, the World War II-era U-2540 (‘U’ stands for ‘unterseeboot’, or undersea boat btw). Revell’s kit of this Type XXI submarine - now known as the Wilhelm Bauer - is a neat and tidy rendering of the 76.7 m (251 ft 8 in) original that was launched in January 1945.
Details, details...
The kit reissue contains 163 components, which build up to make a model some 532 mm (20.9 in) long, and for display purposes the U-2540 can sit neatly on the included stand. On deck, anti-aircraft guns, antennas, periscope and snort mast are included. But it’s the cutaway port side that turns this model into a desirable addition to a miniature naval force. As you can see in the pictures, the torpedo compartment, crew quarters, control room, diesel engines, electric motors, and batteries are all present. 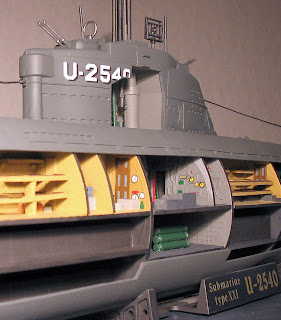 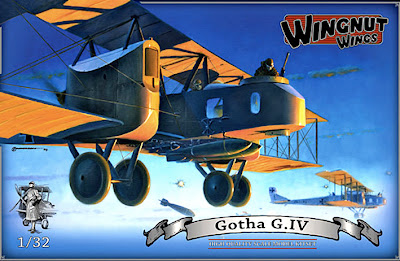 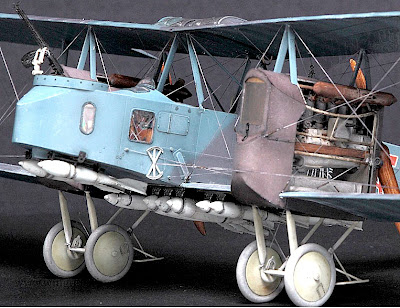 Every now and again a model appears that simply blows us away, and here we are, duly blown, with the wonderfully detailed 1:32 scale Gotha G.IV from New Zealand’s Wingnut Wings.
Building the Gotha G.IV
The real thing had a wingspan of some 23.7 m (77.75 in), a spread which is reflected on the model shelf, at an extensive 730 mm (29 in). It’ll be a build-and-a-half if you decide to splash out and get one - there are 436 plastic components, plus 22 metal-etch fine detail parts. The instruction book’s 40 pages will help you all the way, and there’s a rigging diagram for those with more dexterity (and patience) than this writer. Wingnut Wings have also included various optional parts, decals for five different aircraft, and a pair of engines that are a work of model art in their own right. 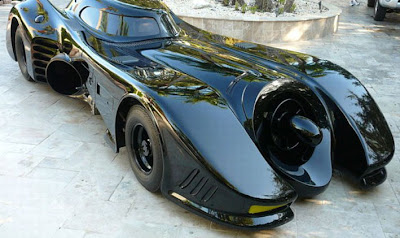 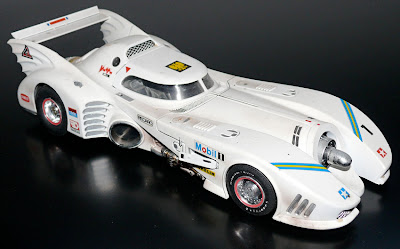 David Jefferis reports
Holy Moley, we like Batmobiles, but $370,100 USD (£232,000 GBP) is stretching the SMN wallet way past breaking point. But eBay buyers certainly didn’t think so, for that’s what the befinned black beast (top pic above) that starred in two Tim Burton Batman movies fetched on Wednesday this week. Mind you, the car - from Batman (1989) and Batman Returns (1992) - didn’t hit the ‘Buy It Now’ price of $499,000.
Batmobile's atomic engine
For power, Burton’s Batmobile had an ‘atomic-turbine’ engine, with a neat flamethrower-style exhaust, just the thing to toast the toes of an unwary bad guy. The real thing that just found a new buyer has a somewhat more prosaic Chevy 350 cu in engine, though we have to admit even that puts the tiny three-cylinder motor that powers the SMN Ibiza in the shade!
Read more »
Email ThisBlogThis!Share to TwitterShare to FacebookShare to Pinterest
Labels: AMT, Batman, Batmobile, George Barris, Polar Lights 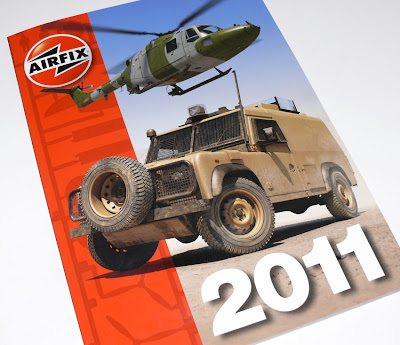 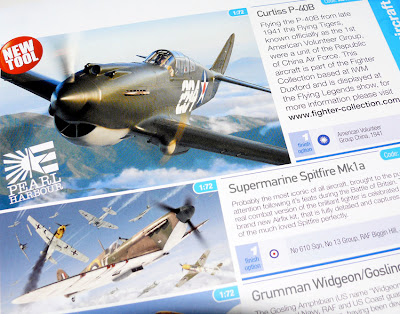 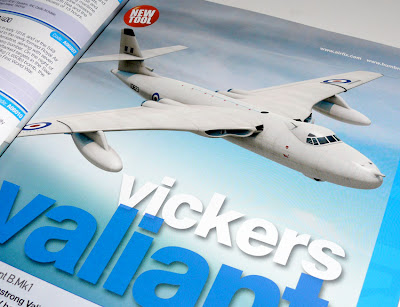 David Jefferis reports
Aaah... The new Airfix 2011 catalogue reminds me of the classic ‘Bisto Kids’ logo, in which two street urchins are depicted in seventh heaven, as they smell the rich aroma of Bisto* gravy wafting by their noses. Except in this case, the smell is aromatic printer’s ink which leads me to the tasty contents of the 130 colour pages of this publication.
New tool kits
The fast-expanding Airfix range is looking very good indeed, with plenty of new-tool products - in fact, there is barely a page that doesn’t feature something new. The pictures give you just a hint of what’s coming this year, but one thing comes over strongly - there’s a clear interest by Airfix in 1:48 scale, which is especially interesting to me, as it’s ‘my’ scale and is a good match for another keen interest, Bachmann On30 railroad models.
Read more »
Email ThisBlogThis!Share to TwitterShare to FacebookShare to Pinterest
Labels: Airfix, Airfix 2011 catalogue, Bisto, catalog 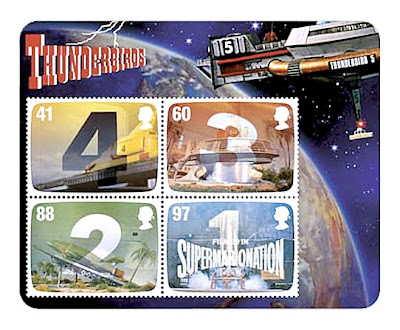 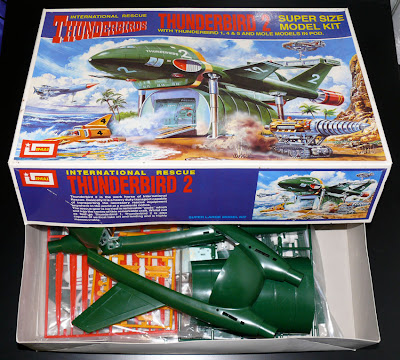 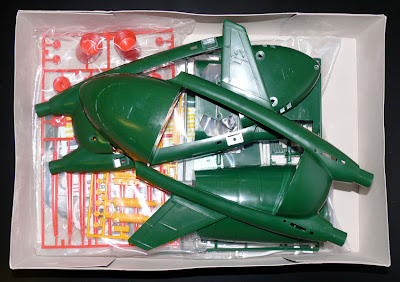 “Thunderbirds are go!" quickly became a popular phrase for schoolkids when Gerry Anderson’s soon-to-be-famous series first aired in 1965. Featuring ‘Supermarionation’ for its puppet stars, led by Jeff Tracy and his sons Scott and Virgil, plus their glammed-up friend Lady Penelope and Brains the scientist, Thunderbirds was soon an international hit.
To the rescue
Based on the remote Tracy Island, the Tracy family made heroic disaster-rescues across the world, using their fleet of Thunderbirds rescue craft, and also fought the bad guys, especially the loathsome Hood. Even so, only 32 episodes were made - a warmed-over live action movie was released in 2004, but was not a success.
T-Bird stamps
Still, times may be changing, as the UK Royal Mail has a set of T-Birds stamps on sale, and Gerry Anderson (now a sprightly 81 years old) confirmed this week that there is a new TV series in the works. Whether it’s live-action or Supermarionation is something we’ll have to find out.
Read more »
Email ThisBlogThis!Share to TwitterShare to FacebookShare to Pinterest
Labels: FAB 1, gerry anderson, Imai, lady penelope, Mole, TB1, TB2, TB5, thunderbirds, Tracy Island 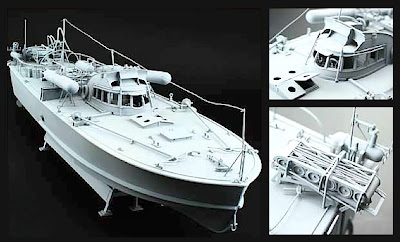 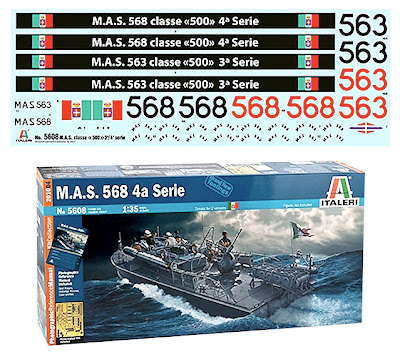 The World War II era MAS - from the Italian ‘Motoscafo Armato Silurante’ (literally, motorboat armed with torpedoes) - is becoming widely available in stores now.
MAS boats were used by Italy’s navy, the Regia Marina, and this very substantial 55 cm (21.6 in) long model is well up to the usual Italeri standard: packed with detail, a neat set of well-printed decals, and a biggish metal-etch fret for super-detail parts. The hull is a one-piece component, always a relief in marine kits, as any trace of warping can make assembly a pain.
The crew
The real thing typically had anything up to a 10-man crew, so what do they look like in this kit? Well, there aren’t any, and it seems to be standard procedure for Italeri to offer humanoids separately. In fact, so far as ships go, it’s not a bad idea, as many marine modellers prefer to show off just the boat, and nothing but the boat.
Read more »
Email ThisBlogThis!Share to TwitterShare to FacebookShare to Pinterest
Labels: 1:35 scale, Isotta Fraschini, Italeri, MAS, Regia Marina 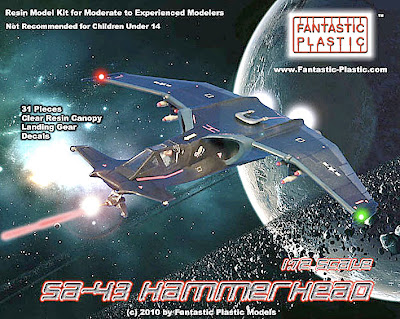 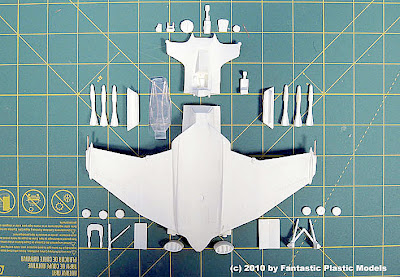 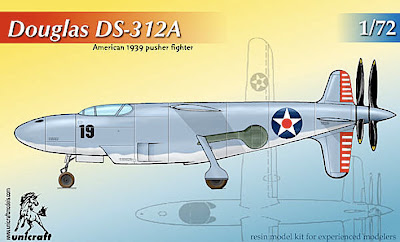 An SMN reader asked this week: “Can I buy Fantastic Plastic products direct in the UK?” Well, we don’t think so, but if there’s a supplier out there who we don’t know about, contact SMN and we’ll give you a mention.

Hammerhead space fighter
But talking of Fantastic Plastic, there’s an interesting new release from this US company, in the form of the Hammerhead air-space fighter from the TV sci-fi series Space: Above and Beyond (S:AAB), which aired for just one season in 1995-6. Thanks to the likes of the YouTube clip shown above, S:AAB lives on as a cult military-tech-drama, and the 31-component Hammerhead, released on December 21 2010, is a neatly-produced reminder of the series.

Fantastic Plastic supplies the canard-design Hammerhead to 1:72 scale, and parts for the single-seater are cast in resin, with a clear canopy.

Pusher-prop plane
This  month sees a host of Fantastic Plastic releases, including the pusher-prop Douglas DS-312A heavy fighter from 1939. It never went into production but paved the way for a number of pusher designs through the 1940s. Incidentally, this appears to be a remarketed version of the DS-312A from Unicraft Models, a company that produces the most amazing collection of weird, wonderful, and just plain extraordinary aircraft. Many of them are of unrealized projects, so visit Unicraft if you have a thirst for the world of what-if aviation.

The best way to get Fantastic Plastic stuff is direct here. 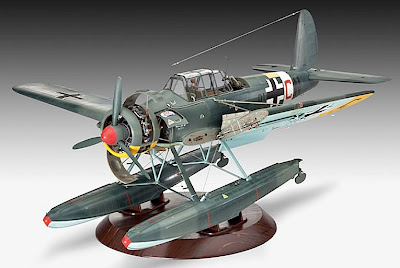 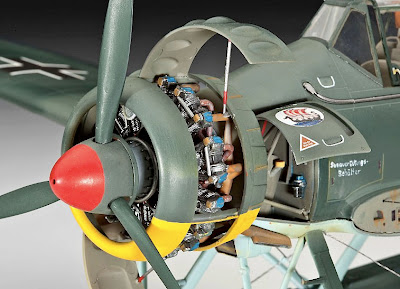 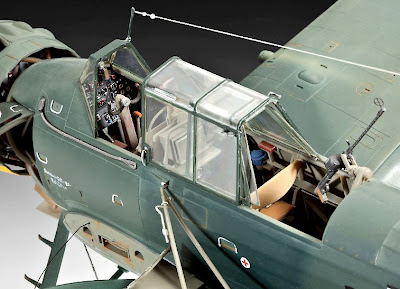 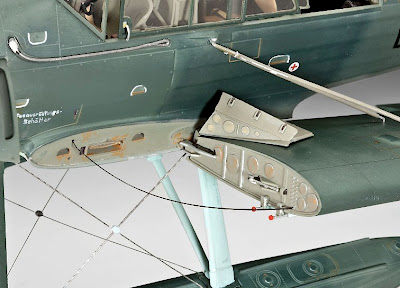 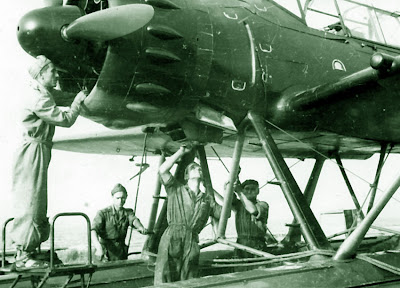 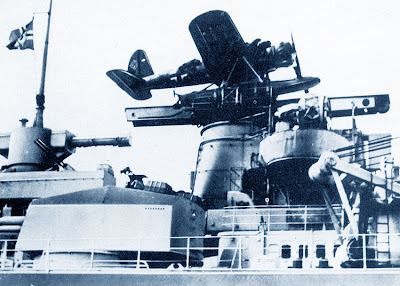 Revell’s Arado 196 armed-reconnaissance floatplane (or seaplane, as you wish) is a fine kit of an unusual subject, for water-based aircraft are not exactly cramming the model stores. No matter, Revell has really gone to town with this one and given us a BIG 1:32 scale kit. Even a two-seater like the Arado comes out a good size at this scale - the wingspan is 393 mm (15.5 in), and 192 components make for a very complete build.

Detailed kit and options
Among the features are neatly-scribed recessed panel lines, excellent detail to the front cockpit and similarly careful treatment to the rear gunner’s station, with its machine gun mount and ammo magazine.

Revell offers various options, such as assembling the wings in flight or folded positions, optional propeller types, decals for two versions and much more besides. The ailerons and air brakes are separate components.

Kriegsmarine service
As for the real thing, it first flew in May 1937, followed by service entry with the Kriegsmarine (German Navy) in November the following year. It was a good handler and popular with its crews - and as the standard armed-recon aircraft, was used across all German naval theatres during World War II. There seems to be no agreement on actual numbers built: we’ve seen figures ranging from 435 to 541, so take your pick. Whatever, it was a tidy-handling, successful package that took catapult launches and craned-up sea recoveries in its stride. Nominally a two-seater, there was room for extra bods to cram themselves in when occasion demanded, such as impromptu air-sea rescues and delivery of personnel.

Request please
The Revell kit makes a good comparison with the smaller Airfix 1:72 and Tamiya 1:48 offerings - old or new, they each show off well the fine lines of the Arado design. Let’s hope that with this kit, Revell follows the excellent example of Italeri in offering a complementary kit of well-sculpted personnel, and maybe some equipment as well - howzabout a launch-ready catapult, Revell?
See the Revell Arado 196 kit here.

And other Arado kits here.

The pictures show:
1-4  Revell Arado 196, assembled and painted.
5  Kriegsmarine engineers servicing an Arado 196 on the water.
6  Arado 196 ready for catapult launch from the battlecruiser Gneisenau.