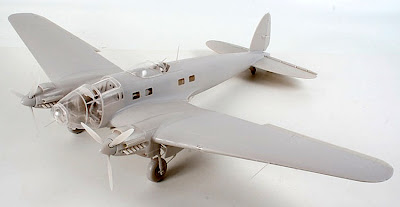 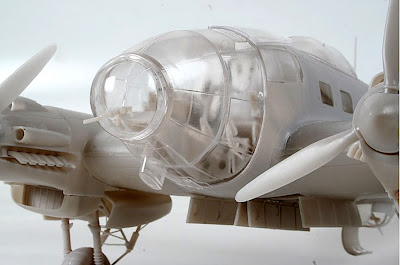 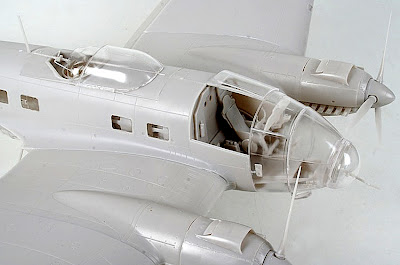 The Revell He 111 is a BIG bomber in 1:32 scale, and joins the ever-growing ranks of kits in this scale. Whether 1:32 will ever replace 1:48 is a moot point, but it is not too far from the widespread military 1:35 scale, and there are plenty of cars out there too, including Scalextric slot racers, which get more attention to detail and so more model-like (rather than toy-like) with each succeeding year.
What’s the He 111 kit like?
The pictures (courtesy Revell) reveal an attractive model of this World War II medium bomber, with plenty of detail, which looks particularly neat in and around the nose glazing zone. Once assembled, the seams are filled, paint applied, and weathering completed, this could well be the biggest and best He 111 available. It’s good to see tyre and undercarriage detail so carefully attended to, and the bomb bay looks to be particularly well done. In this large scale, it’s fair to say that diorama fans in particular might want (even expect) a pair of detailed engines and more in the way of fuselage interior to be part of the package - in fact (just to dream) how good it would be to see a cutaway version of this kit, along the lines of the U-2540 sub we looked at the other day. Ah well, a future plan perhaps! 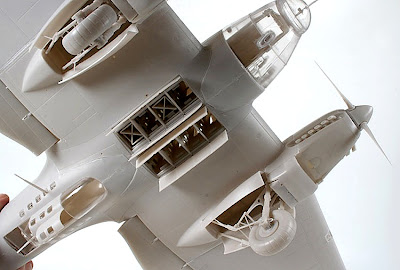 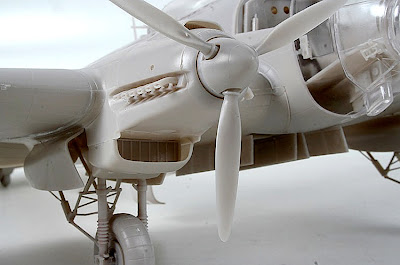 He 111 bomb bay passenger cabin
Note the He 111’s internal bomb bay - in the 1930s, when the basic design was being developed, the civil version sidestepped international agreements for Germany’s forces by calling this space a four-seater ‘smoking compartment’, with a further six seats in the fuselage behind. Cunning plan, huh?! 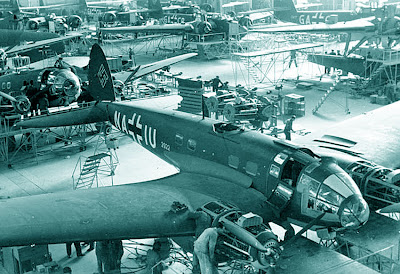 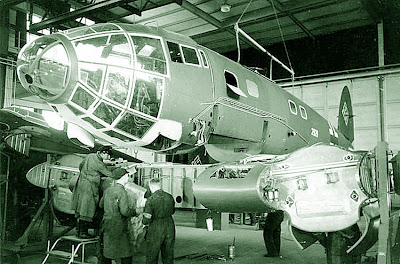 The He 111’s long career
Various bombers were developed as He 111 replacements, but none were successful enough to sideline Heinkel’s successful design, which saw action on all fronts throughout World War II. The Spanish Air Force used the re-engined CASA 2.111 version until as late as 1973 and, repainted in Luftwaffe markings, this bomber also starred in movies such as Battle of Britain and Patton. To an aeronerd like this writer, it never looked quite right though, as the 2.111 was powered by Rolls-Royce Merlins, rather than the Junkers Jumo engines that powered the Heinkel originals.
See Heinkel He 111 kits here.
The pictures show, top to bottom:
1-5  Revell He 111 unpainted test build.
6  Manufacturing the real thing during World War II. Pictures courtesy Bundesarchiv.
Email ThisBlogThis!Share to TwitterShare to FacebookShare to Pinterest
Labels: 1:32, CASA 2.111, Heinkel He 111, Revell
Newer Post Older Post Home