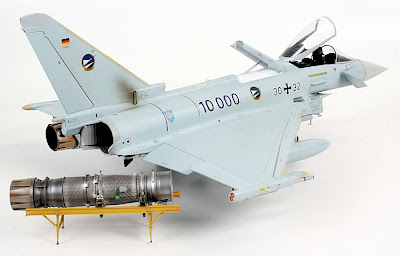 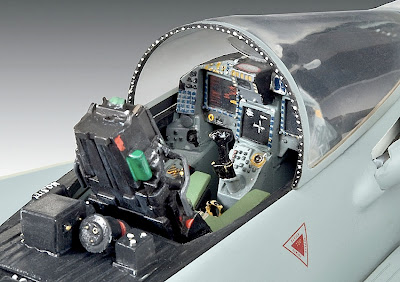 SMN report
The big, 349 mm (13.7 in) wingspan 1:32 scale Eurofighter Typhoon is an imposing beast when you open up the box. It’s got 391 parts, a fuselage length just short of 500 mm (19.7 in), and it’s a completely new mould, with decent surface details and recessed panel lines. The level of detail rivals Revell’s other big-scale kits, with an 11-piece ejector seat, moveable canards,  jet nozzles in two configurations, detailed air brake, landing gear and bay, plus separate ailerons, flaps and rudder.
This Typhoon is ready for combat
ECM pods are provided, as are the in-flight refuelling probe optionally extended or retracted, and two drop tanks. Revell has really gone to town with the weapons fit, with a total of 14 missiles ready for bear - four Meteors, four AMRAAMs, two Sidewinders, two IRIS-Ts, and finally a brace of ASRAAMs for the RAF version. There's also a maintenance stand with supports and suspension points to display one of the two EJ200 engines. Decals for the German Luftwaffe and British RAF round out the kit. 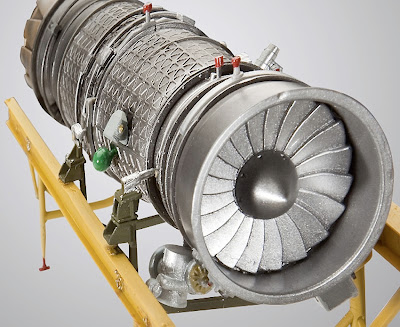 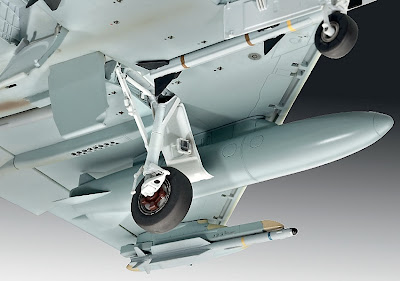 Engine detail
Impressive as that lot is, the display engine could do with some extra work on the front fan - the blades are really not quite there. You can see a real EJ200 in the recent story about Bloodhound SSC speed record car, where you can get a better idea of the fineness needed to make that front end look convincing. A photo-etch front fan could do the biz, so it might be a good idea to look for an aftermarket supplier that can do justice to it.
Small scale stablemate
Revell’s smallest Typhoon is to 1:144 scale, and it’s a tiny thing, with a wingspan of just 76 mm (2.99 in). Even so, it’s a neat little kit, that won’t disgrace a collection to this scale, or even as part of a Dynamic Duo big-n-small display pair. As you can see from the pix, it’s a neat production. 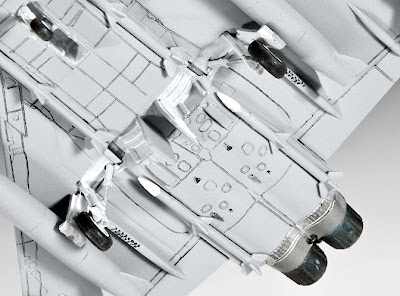 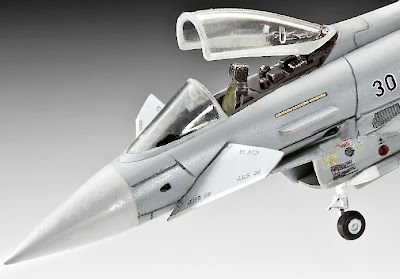 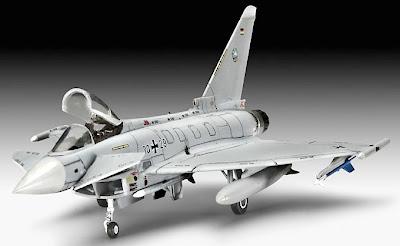 Birth of the Eurofighter Typhoon
The Typhoon's development dates back to the 1970s and 1980s, when it was conceived as a NATO defender of European airspace in the days of the Cold War. Since the fall of the Berlin Wall though, it’s been a troubled programme, with many experts and politicians questioning the need for it. Even so, on a technical level, the aircraft is a success, and by all acounts it’s a decent ‘pilot’s plane’, with good handling and a great all-round view from that big canopy. The latest helmet gives the pilot ‘fire and forget’ capability, which means that he (or she) can concentrate on flying the aircraft, rather than weapons tracking or guidance. 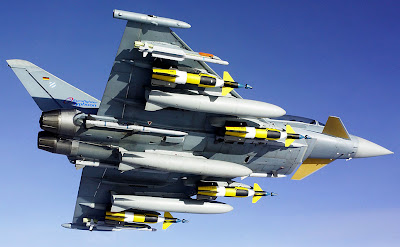 Fighter or bomb truck?
Meeting the politicians head-on with an answer to the ‘why do we need it?’ question, Typhoon's designers have taken the aircraft far beyond its original brief as a combat fighter. It now sports 13 hardpoints and can tote a pretty complete range of air-to-ground as well as air-to-air weapons. All it needs now is conformal fuel tanks and overwing missile launchers to take on a passing resemblance to a Christmas tree - and lose any pretention to stealth capability whatsoever! 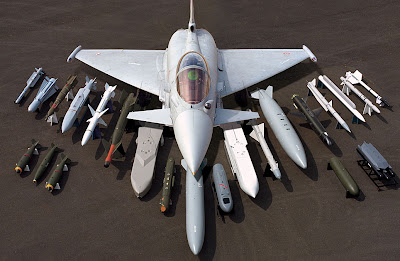 See Revell Typhoon kits in various scales, including 1:32 and 1:144 here.
The pictures show:
1-4  Revell 1:32 scale Typhoon, including that not so convincing front fan.
5-7  The ‘Tiny Tim’ 1:144 scale version, and very neat it is too.
8-9  The real aircraft sports an impressive weapons fit.
Email ThisBlogThis!Share to TwitterShare to FacebookShare to Pinterest
Labels: 1:144, 1:32, Eurofighter, Revell, Typhoon
Newer Post Older Post Home