THE WONDER OF WONDER WOMAN - A SUPERHEROINE KIT FROM MOEBIUS MODELS 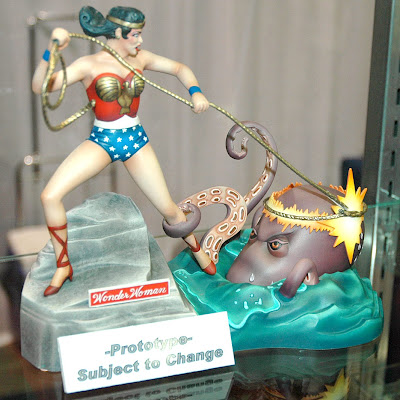 A Mat Irvine review
Although Wonder Woman is most likely best known from the 1970s TV series starring Lynda Carter, the character existed long before that. In fact, the original Aurora kit of 1965 was based on the comic books that first featured the character in the 1940s. Along with Wonder Woman, Aurora issued others in the same vein, such as Superman, Superboy, Spider-Man, Batman, Robin, and The Penguin. However, amongst all those boys (and a bird), Wonder Woman never seemed to have quite the appeal - must be all that testosterone (and fish) - and the Wonder Woman kit was only available for a couple of years.


Wonder Woman gets lost?
Aurora did reissue its figure kits a few times, and invented the Comic Scenes series in the 1970s. Many of the original figure kits were repackaged under this title, a few parts were changed, there were new boxes, but otherwise they were pretty much the same as the originals. However there was one reissue absentee - Wonder Woman. The story went that the tooling had been sent to an outside company for moulding. This in itself was not unusual as although Aurora had many in-house injection moulding machines, when these were fully occupied, outside companies had to be used occasionally. It is thought that a batch of mouldings for Wonder Woman was one of these, but the tooling never came back and was lost, presumed scrapped.

Retro-engineering from Moebius Models
Consequently, Wonder Woman has become one of the most sought-after of these original superhero figures, and an unbuilt one can command a price approaching $500 USD (£310 GBP). Good for those with a stash of unbuilt kits, not so good for those who want to actually build one, rather than keeping it mint-and-boxed as loft insulation. This is where the 'New Aurora' companies have come into their own, and one of the major ones, Moebius Models, has now retro-engineered the Wonder Woman kit, slightly modifying some parts to improve fit but otherwise producing a near- identical kit to the original. This is true, even down to the style of plans and a virtual clone of the original Aurora box. It is even moulded in the same flesh/tan-coloured styrene. 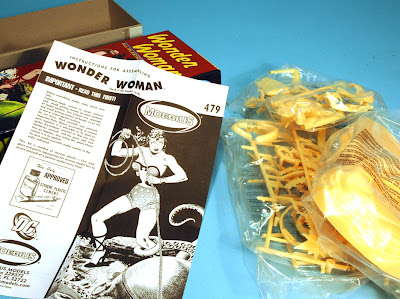 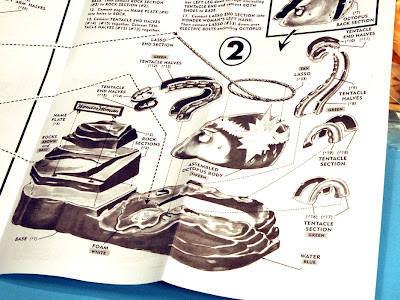 Inside the box
Like most of these 1:12 scale personalities, the Moebius Wonder Woman is reasonably straightforward to put together, even if you are not accustomed to building figure kits. The actual colour of the plastic is almost irrelevant, as most of the effort will go into the painting and recreating the lady's set of very colourful garments. In the box you get more than a superheroine though, for there's the fearsome-looking octopus trying to wrap its tentacles around her legs. Much like the somewhat surreal quality of art used in the original comic and on the box, the octopus is highly stylized, but none the worse for that, and as you can see from the photo of the Moebius prototype that I took at the iHobby Exop Hobby Show in Chicago, the whole ensemble - WW, octopus, rock and sea - gains immeasurably from a careful paint and airbrush job. An SMN reader has pointed out that the skilled model work here was the work of Amazing Figure Modeler fame David Fisher.

So if you feel that male superheroes shouldn't have it all their own way, you can now add Wonder Woman to the collection - and the price is slightly more modest, at a UK price of around £27 GBP. She is an excellent addition to the growing Moebius Models range, and well worth having if you're into comics.
See the Wonder Woman kit here.

The pictures show, top to bottom:
1  Wonder Woman tackles yet another pesky octopus. Just think of all that calamari…
2  The box for the Moebius Models Wonder Woman is a virtual clone of the original Aurora kit from 1965
3  The plans also reflect the original Aurora style.
4  Neatly bagged components are moulded in tan plastic.
5  There’s a new-style Wonder Woman being planned (publicity art shown below), who has an altogether more butch look. 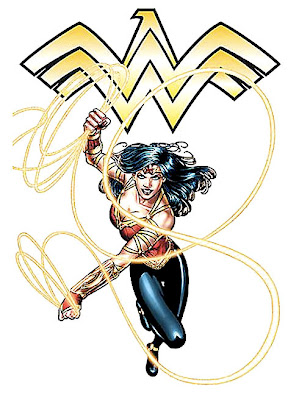 Thanks to Andy Yanchus, Project Manager for Aurora for many years, who gently pointed out some errors that crept into the first edition of this review.