BETTER LATE THAN NEVER? ANOTHER BATMOBILE COMING SOON - THIS TIME FOR KIT BUILDERS

Mat Irvine reports
It’s one of the mysteries of the modelling universe - why has there never been a conventional injection-moulded styrene kit the Batmobile in traditional 1:25 scale? Well, now there is.
Batmobile on a tight schedule
The vehicle in question is the Batmobile, as built for the 1960s television series, starring Adam West and Burt Ward as Batman and Robin. The series was less ‘dark’, more ‘comic book capers’, than the more recent movies, and in keeping with the action-adventure rhythm, the TV studio decided it needed a ‘star car’ in just three weeks. The well known car customizer Dean Jefferies started work on adapting a Cadillac, but had to turn the job down as being too impracticable in the time available. However, another Los Angeles customizer took up the challenge - mainly because he had the raw material parked outside his workshop. 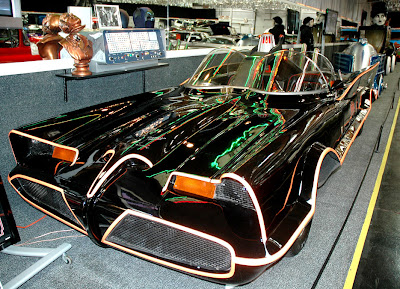 George Barris and the Lincoln Futura
The man in question was ‘King of the Kustomizers’ (his spelling) George Barris, and the car in question was the Lincoln Futura. This styling exercise, produced by the Ford Motor Company in the mid-1950s was a real looker, with a twin bubble canopy, was built by Ghia in Italy, painted a pearlescent white (which invariably looked slightly greenish) and which had toured the Car Shows to much acclaim.
Star car for Debbie Reynolds
The Futura was already a star car - it has been used in the 1959 movie It Started With a Kiss starring Glenn Ford and Debbie Reynolds, in which it was painted red, a colour that looked better onscreen than white. After that appearance, Barris obtained the car for himself - the actual details are a murky automotive urban myth, though the cost was supposedly just a single dollar. And it was because the Futura was ready in his yard that Barris could turn the design around in the allotted time.
Many Batmobile kits
The 1960s were a big time for TV and movie star cars, and many were made as kits by the likes of AMT and MPC, plus a few by Revell and Monogram. But not the Batmobile, at least not in 1:25 scale. Instead, Aurora made it in 1:32 scale, and for decades this was really the only example generally available, although there were a few Japanese copies. There were resin versions for the specialist modeller, some based on the 1:25 scale Revell Futura kit, and of course many of the later movie cars, but no conventional kit in 1:25. 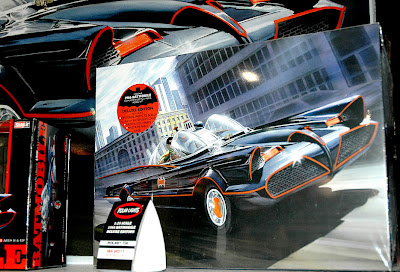 The Polar Lights 1:25 scale Batmobile
But now, even if it is a mere 47 years late, we are due for a 1:25 scale injection-moulded kit of the Barris Batmobile, this time from one of the ‘New Aurora’ companies, Polar Lights. There will be three versions of the kit: a snap version, a conventional glue version, plus - and this sounds really mouthwatering - a super-detail De Luxe Edition with photo-etch parts. The release date is still uncertain, but hopefully we’ll see it by mid-2011.
The pictures show, top to bottom:
1  From left, Batmobiles in a collectible tin, and original-style Aurora box, plus a Batcycle and Batboat.
2  One of the original Batmobiles built by George Barris, now on display at the Volo Auto Museum, Illinois. Just exactly how many Batmobiles there are is another urban myth, but the usually quoted number is four. The first one came from the Futura, then three more were made in glass-fibre from a mould pulled from the first body. These last three cars used Ford Thunderbird running gear. Actually, there was a ‘Barris Number Five’ - this wasn’t built by George, but he later acquired it.
3  Boxes for the conventional glue (left) and Snap-Together versions.
4  Deluxe Edition Batmobile. This will have photo-etch parts and a pinstripe paint mask.
For information on the history of the TV Batmobile visit here.
Visit the online home of the ‘King of the Kustomizers’ here.
View a whole colony of Batmobiles here.
And tour the Volo Auto Museum here.
Email ThisBlogThis!Share to TwitterShare to FacebookShare to Pinterest
Labels: AMT, Batmobile, George Barris, Polar Lights, Volo Auto Museum
Newer Post Older Post Home