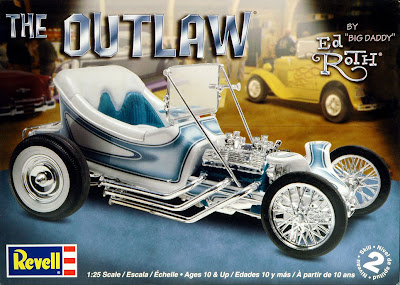 Mat Irvine goes custom crazy
Although the wacky cartoonist and car customizer Ed Roth died in 2001, his legacy of amazing ideas and art - and not forgetting the infamous ‘Rat Fink’ character - lives on. Since Revell started making kits of Roth’s ideas in the 1960s, they have rarely been off the shelves. 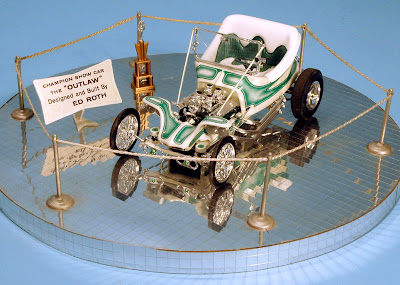 Regular customs from Revell
Revell has produced 1:25 scale kits of many of his most famous creations such as the Beatnik Bandit, Surfite, Road Agent, and Mysterion, and reissues them regularly. The Outlaw custom was one of the first kits to be made, and here it is again, now featuring new box-art, but basically the same kit that first appeared way back in 1961. 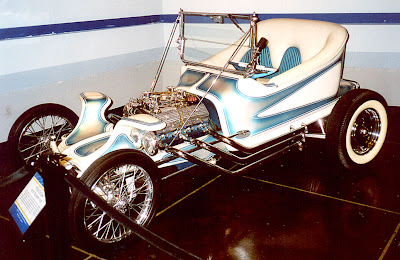 Gear shift or weapon?
The Outlaw was one of Roth’s very earliest designs, going back to 1956, and was originally called Excalibur because he’d used the handle of a revolutionary-period sword as the gear shift. However, urban myth has it that nobody could pronounce the name, so he renamed the car Outlaw, a story which perhaps has more of a ring of truth to it!
What’s the kit like?
The original 1:1 scale custom car used parts from a ’22 Dodge, ’29 Ford Model A, ’37 Ford, ’ Cadillac, and a ’58 Chevy, to name but a few, and these are all faithfully reproduced in this classic kit. The chassis and running gear was almost entirely chrome-plated, and Revell reproduces this with many parts on the chrome component runner. It’s fair to say that the Outlaw is a slightly tricky kit to build, mostly due to the small size of many of the parts, but it’s a very satisfying model once completed. As you can see from the picture of my finished build, Revell also includes a sign plate, a miniature trophy, and a set of stanchions for the ropes that would typically surround the car at a show.
Showtime for the Outlaw

With these extra parts in mind, I decided to make the most of them by presenting the Outlaw on a mirrored turntable base. The mirror tiles are not glass, but come in thin, aluminized plastic sheet form, which makes cutting to shape an easy exercise that’s also free of breakage risk. You can usually find this material at craft or household stores, and it’s worth keeping some in your parts storage zone. The advantage of a mirror finish is that it also shows off the underneath of your model, which is as useful for chassis details of the Outlaw, as the weapon and undercarriage bays of a military aircraft, though the latter would look better with plain mirror sheet, rather than the deco-style tiles used here. 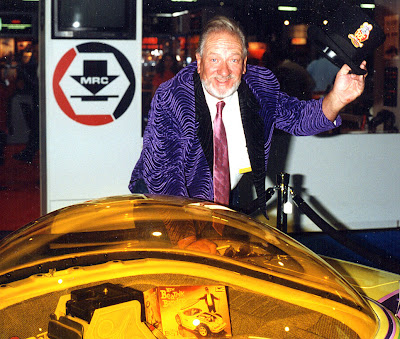 Visit Ed Roth’s Rat Fink site here.
A book about Big Daddy here.
Also, a neat Welly diecast VW Combi in ‘Tribute to Ed Roth’ markings here.
The pictures show, top to bottom:
1  New box-art for the Revell’s new issue of Ed Roth’s Outlaw.
2  Side panel of the box shows the various accessories included with the kit.
3  The complete kit, with the accessories, plus a display base made from stick-on mirror material, stuck to a circular base.
4  The real thing in all its glory.
5  Ed Roth in 1996 on the Revell-Monogram stand at the Chicago National Model and Hobby show (now named the iHobby Expo). He’s standing behind one of his last creations, the Beatnik Bandit II, also kitted by Revell.
6  Rat Fink at the wheel of another Roth-Revell co-production. 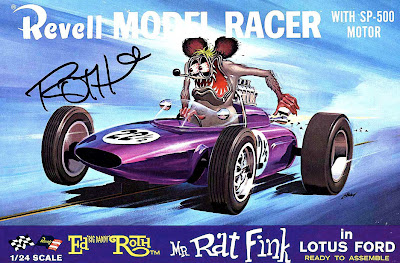