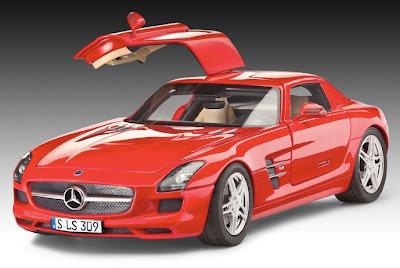 SMN reports on the 1:24 scale Revell Mercedes-Benz SLS AMG kit
Until the New York Motor Show of 1954, Mercedes-Benz street cars were seen mostly as somewhat ordinary, if safe and sensible, four- and five-seaters. Then things changed dramatically, when M-B wowed the hordes of show visitors with its new 300 SLR (picture below the jump), a roadgoing version of its SL ‘Sports Light’ competition car. But what set the SLR apart from anything else on wheels was the pair of upward-opening ‘gullwing’ doors. The 300 SLR became an instant icon, and in one fell swoop, turned Mercedes-Benz into a desirable brand. 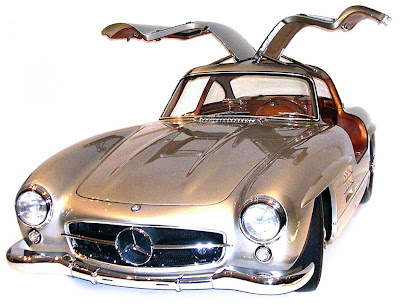 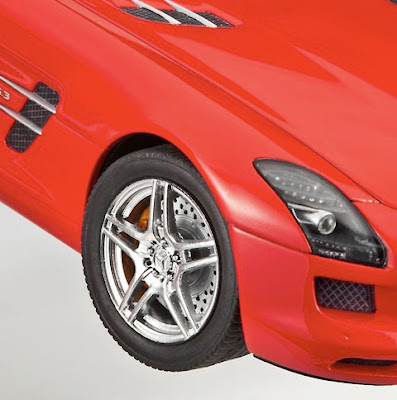 Gullwing up to date
The modern version of the car is the Mercedes-Benz SLS of 2009, a hugely desirable performance machine, capable of an official 317 km/h (197 mph) though we’re told that a keen driver could reckon on blowing well past the 200-mark with the right road and weather. The SLS also has those gullwing doors, and the top-spec edition is made by AMG, M-B’s performance subsidiary - and this is the car that Revell has chosen to model in 1:24 scale. 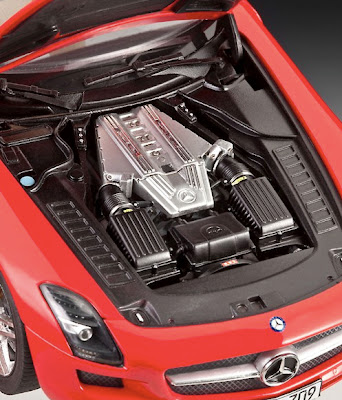 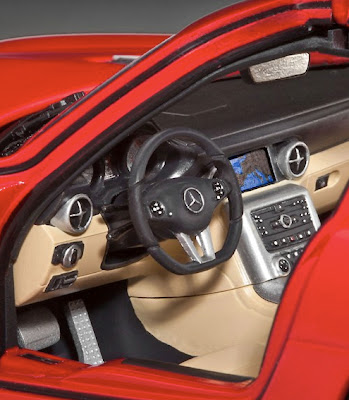 What’s the kit like?
It’s a neat kit of the 2009 machine, made up of 136 components, quite a high parts-count for a model just 193 mm (7.6 in) long. Still, that’s no bad thing for model makers, and Revell has really packed in the detail, as you can see from the pix we show here. Apart from those ace up-and-down doors, the interior is nicely handled with a full set of gauges and dials, even a satnav in the middle of the fascia panel. The engine cover lifts up to reveal a beautifully crafted eight-cylinder powerplant. The wheels rotate and the front pair steer left and right, to make the displayed model look that much more realistic.
Killer looks in red
The bodywork is moulded in red, which is fine, but ideally you’ll give it a spray finish to get the depth of colour necessary to make it look convincing. If you are into registration numbers, then Revell should make you reasonably pleased by supplying a decal set of five international plates.

SMN score
For auto enthusiasts, this model of a modern classic is well worth adding to the collection, especially if you have the ‘original classic’ already on your display shelf. Don’t forget that Revell also does a fair kit of the 300 SLR’s direct ancestor, the competition 300 SL, with faired-in headlights and smaller grille. As you can see below, it could make an ideal coupling for display with the SLS. 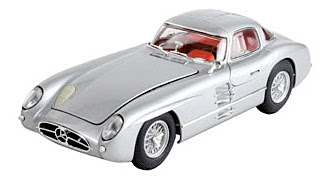