NEW 2011 VW BULLI vs. OLD HIPPIEVAN, PLUS NEW CONCEPTS, DIECASTS TO LOOK AT

David Jefferis looks at the VW Bus
Mat Irvine’s VW Microbus article stirred up some comments, especially when we invited comparisons with the new Bulli version, unveiled at the Geneva Motor Show, which ends on 13 March.
Other ideas out there
Seems as if VW’s Bulli is a bit plain-Jane for VeeDub fans, and too similar to people-movers like the Ford Galaxy et al. Also, the 2001 concept was - and remains - sooo much cooler. So I thought it might be interesting to see what else is out there, and ran across a couple of concepts. First off, the Photochop from ‘D nice’ at VW Vortex smooths off the nose and blacks out the glass to bring back some character - compare them above and see what you think. I know which I like! Then there’s also the work of Canadian designer Alexandre Verdier, whose ideas are very nice indeed, especially his ‘woodie’ version, shown after the 'read more' jump. 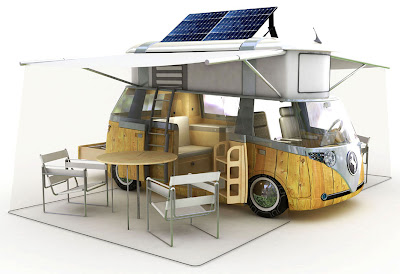 Fast bus with solar assist
Fired with enthusiasm - I'm a one-time ‘Bay Window’ owner - I got out my pen and marker to sketch out a thought for a performance-orientated replacement. Well, they’re only a couple of quick sketches, though right now, I could do with basking in the sun with my auto-extending sunshade in operation! Oh and that's the iPad I'm reading, unclipped from its normal position as a touch-screen instrument panel on the dash. 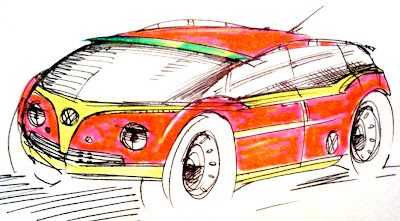 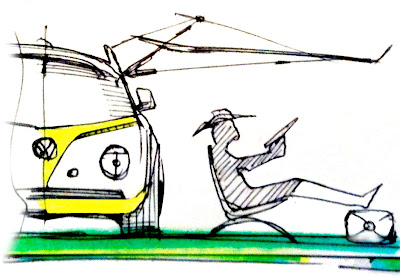 Diecast Microbus options
As Mat had reviewed the Revell kit, I thought I’d see what’s what in the world of diecasts, and snouted around the SMN Cellar of Surprises, to come up with these three examples. The pale green VW is from the Cars toon movie; it’s about 1:64 scale, and is quite cute, especially as the eyes open and shut depending on your angle of view. If you’re into theme collecting, then this would make a fine addition to the Cars car park. 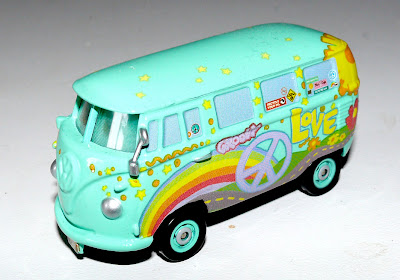 Custom job from Maisto
The other two VWs are to 1:25 scale. The wine-and-black one is made by Maisto, and represents a lowered custom version, fitted with trick wheels, chromed engine, 15 (yes, 15) speakers, and even an LCD TV showing a Microbus video. I replaced the roof panel with transparent acrylic, otherwise the Maisto is stock, as bought. It’s perhaps more toy than model, but fun stuff nevertheless and a great buy for anyone who is into vans and campers.

Classical bus
The other Bus is from Chinese company Welly, and it’s titled a ‘Classical Bus’, representing a 1962 split-screen version. It’s a very basic representation, with no opening doors or engine detail - the only working item is the liftable rear window. Even so, the Welly - like the Maisto - has a floor pan and bodyshell joined by screws rather than rivets, so the way is open for a fairly straightforward detailing job. 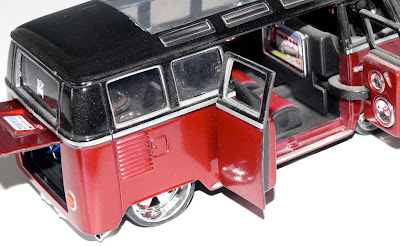 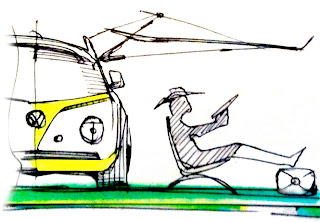