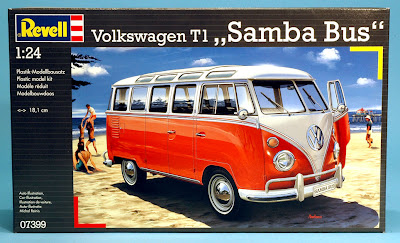 Mat Irvine looks at the 1:24 scale Revell VW Microbus kit
Way back in 1957, Revell Inc was based in Venice, California, close to the sea and surf of the Pacific Ocean. The company produced a kit of what was becoming one of the vehicles in which to carry your surfboard. But this wasn’t a product of one of the major American car companies - instead, it came from the other side of the Atlantic, for it was a kit of the German VW Microbus, also known as the Samba or Combi.
Revell and Hasegawa link up
The kit used a multi-piece body, in that you got separate side, front and rear panels, roof and four doors, plus hatches at the back. Over the years the kit was modified (the rear hatch was enlarged) and reissued in a number of guises. But the kit was slightly showing its age and when Hasegawa also decided to make a VW Bus, (with van and pickup versions as well), Revell (which had a tie-in with the Japanese company for some time) reboxed the kit and issued it as its own. This time the body was the more usual one-piece, though features such as opening doors and separate engine were not a feature of the Hasegawa version. 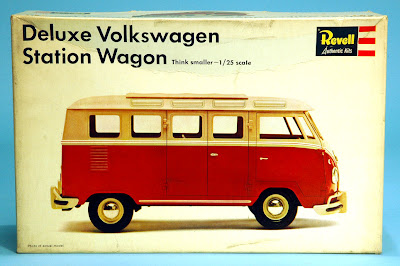 New version of the Microbus

Now Revell has gone full circle with a third version of the VW Microbus, with Revell-Germany producing a brand new kit. This uses the original multi-piece body approach, but with many more details than were first supplied. However, it is one of the very few multi-piece body vehicle kits that is virtually impossible to assemble ‘as one’, then paint; it all has to be done as individual panels then bought together with the final assembly. 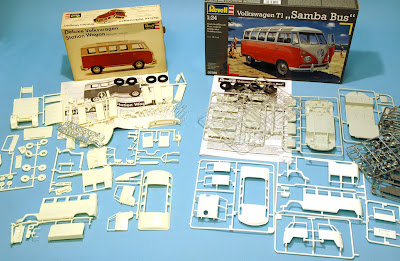 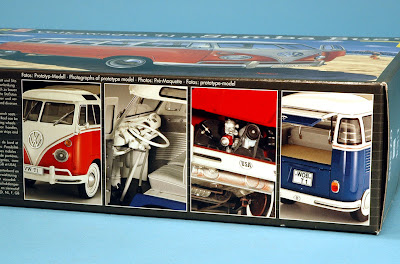 Left or right-hand drive?
Optional parts, mainly bumpers and lights, are supplied for Euro and US specifications, and number plates for a variety of countries including the UK, though the vehicle itself is supplied only as a left-hand drive vehicle. Swapping the steering wheel over for a UK-specific vehicle is less of a problem that the fact that the rear double-doors swap sides as well, so are more of a modification - one for the really dedicated! 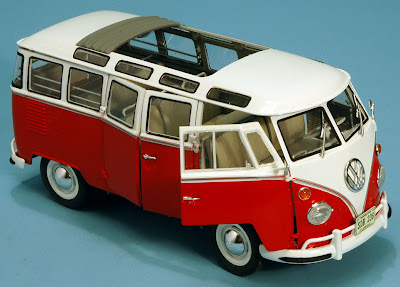 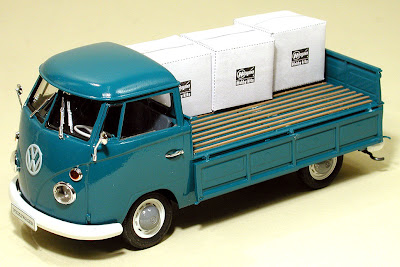 One oddity though. Although this kit is brand-new tooling, some parts can be seen as copied old to new and are virtually identical. But the original kit was listed at 1:25 scale, the new one is to 1:24... 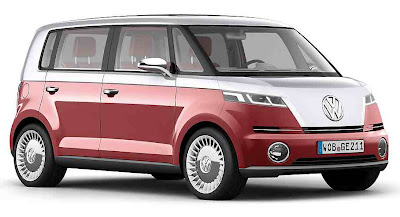 Volkswagen at the 2011 Geneva Motor Show
Meantime, at this week’s Geneva Motor Show, VW has shown off its latest version of the ‘Hippiemobile’. It’s called the Bulli, and is a sleeked-over modern take on the basic concept. What do you think of VW’s latest - more or less character? It’s in concept form at the moment - do you think it ought to go into production? 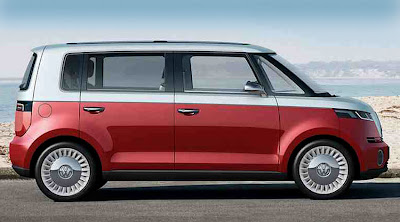 See the VW bus kit here.
VW T3 camper van here.
Other Microbus models here.
The pictures show, top to bottom:
1  Box for the new VW Samba bus.
2  Box for one of the previous issues, this is actually a Revell GB product.
3  Comparing the parts from old (left) and new. The older kit was still fairly comprehensive, but the latest kit has more parts.
4  Side of the new kit’s box, showing the two intended colours - red and white, or blue and white - though the final scheme is really up to you.
5  The completed kit finished in the red and white scheme.
6  As a comparison, the Hasegawa VW Bus in its pickup version.
Review kit supplied by Revell.
Email ThisBlogThis!Share to TwitterShare to FacebookShare to Pinterest
Labels: Combi, Microbus, Revell, Volkswagen, VW
Newer Post Older Post Home