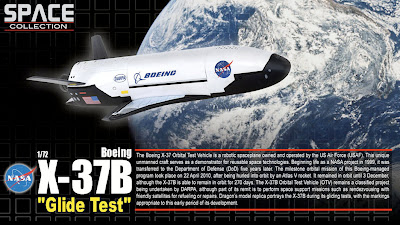 SMN report
The Chinese model company Dragon continues to add models to its ‘Space Collection’ range. The subjects vary in scale from 1:72 to 1:400 scale, plus 1:6 scale astronaut figures. Spacecraft are ready-built, mixing diecast-and-plastic parts, and there are several new ones that have just come in, including a variation on the 1:72 scale X-37B ‘mini Shuttle’ we discussed a while back.
X-37B glides in to a smooth landing
Dragon’s latest X-37B represents the automated vehicle in early glide-test mode, which is a neat (if specialist) addition to a tabletop space fleet. As we mentioned before, the real thing looks distinctly more careworn than this miniature version, but no matter, you can always give Dragon’s X-37B a dose of the weathering treatment with an airbrush. 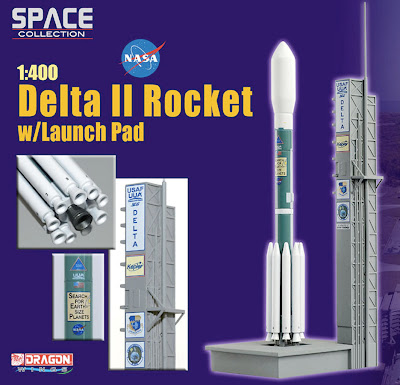 Delta II space launcher
Next up, Dragon present us with a 1:400 scale Delta II launch rocket. This is an old-stager in NASA’s lineup, having been around since 1989, the rocket counting no less than seven Mars missions among its 146 successful launches. As for the Dragon miniature, it’s a neatly produced model that shows off the cluster of nine booster rockets around the base very well indeed. The included launch tower sets it off well too; it has been simplified dramatically for this purpose, but looks OK if you don’t go too close, though a little detailing would work wonders for its appearance. 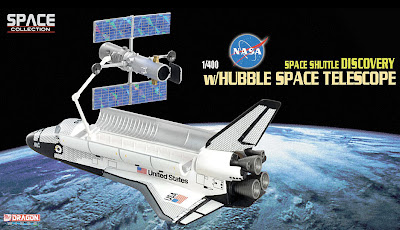 Discovery Space Shuttle with HST
Yet another Shuttle model, but welcome nevertheless, this 1:400 scale model of the Discovery includes open bay doors with a detailed interior, and the robot arm extended with the Hubble Space telescope (HST) clutched in its mechanical claw. A fine monument to a spectacularly successful scientific instrument, and to a spacecraft that is now firmly back on terra firma. After decommissioning this year, Discovery will replace the Space Shuttle Enterprise in the Smithsonian Institution display at the Steven F. Udvar-Hazy Center at Washington Dulles Airport, Virginia. 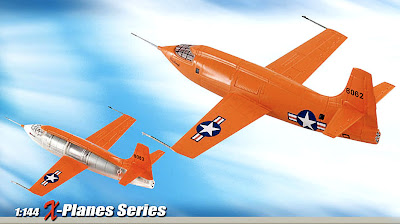 Bell X-1 rocket-plane
Last of the Dragon releases we're looking at here is the Bell X-1 rocket-plane, the first aircraft to crack the ‘Sound Barrier’, with test pilot Chuck Yeager at the controls in 1947. Dragon’s model is to 1:144 scale, so it’s a tiny little thing, barely 60 mm (2.36 in) from wingtip to wingtip. But the proportions seem just right, the detailing is not too heavy, and - a bonus from Dragon - you get not one, but two X-1s in the box. One of them has a standard-issue solid fuselage, the other sports a transparent port half, in which you can clearly see fuel tanks and other details. Nicely done Dragon!
View or download the Dragon Models Space Collection brochure here.
The pictures show, top to bottom:
1  X-37B ‘glide test’ 1:72 scale model from Dragon.
2  Delta II space launcher with launch tower, to 1:400 scale.
3  1:400 scale Discovery with HST.
4  Bell X-1 to 1:144 scale in two versions.
Email ThisBlogThis!Share to TwitterShare to FacebookShare to Pinterest
Labels: Bell X-1, Discovery, Dragon Models, HST, Hubble, Smithsonian, Space Shuttle, Udvar-Hazy, X-37B
Newer Post Older Post Home