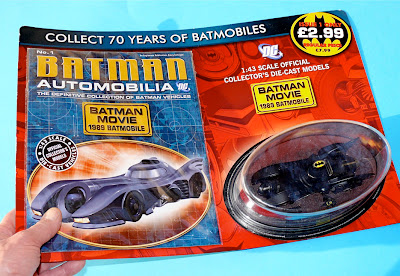 SMN report
We’re using ‘unboxing’ in its widest sense here, as most of this new product is actually flat printed paper. Still, who’s quibbling - what we have is the first in ‘the definitive collection of Batman vehicles’, and this starter for what could be a l-o-o-n-g partwork series makes a terrific package, and as is usually the case with partworks, it’s offered as a knockdown price to lure you in as a faithful subscriber. 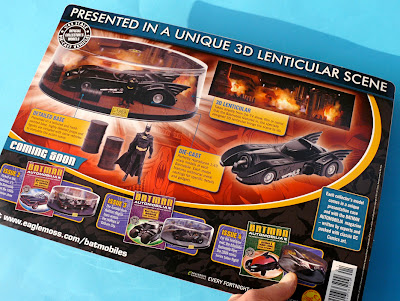 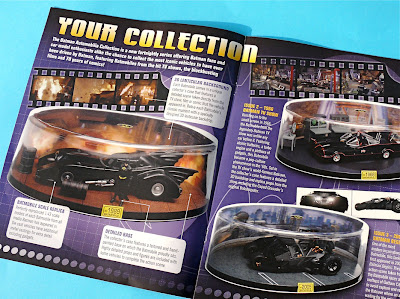 Excellent package
Well, suckers we’re not, and this looks like one of the better offerings around. For just £2.99 GBP ($4.84 USD) you get a big 477 x 326 mm (18.75 x 12.8 in) double-sided backer board, on which is mounted a 12-page magazine, an eight-page series intro, three free-offer sheets and a Questionnaire Survey. This last asks far too many personal questions for this good ol’ boy, but those less sensitive about their private lives may well fill it in for the chance to win one of 10 Batman DVDs. 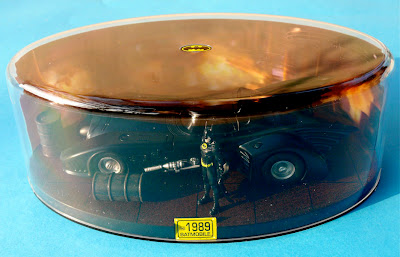 Diecast Batmobile
And now to the prime component of the package: a diecast 1:43 scale Batmobile. The black and beautiful 1989 movie-special is mounted on an oval base, with a quite excellent scale Batman figure, plus a couple of oil drums, all items being set on a diorama base that slots into a clear oval case. A nitpick is the rather obvious moulding seam on each lightly-weathered drum, but these are not bad enough to spoil the general flavour. Eaglemoss Collections, the publisher behind the venture, claims the curving picture backing inside the case is a ‘3D Lenticular’ which is true enough, though you have to squint closely to appreciate it. But the important thing is that the Batmobile looks terrific inside that oval dome, where it will also remain pristine and free of dust.

Excellent presentation
As you can see from the pix, we have here a decent miniature, set off very well by the presentation. The extra pictures show a couple of other Batmobiles parked at SMN Towers. The white one is the SMN ‘Special’, a white AMT 1:25 scale kit, presented as a semi-retired Batmobile in weekend-racer colours. And lo and behold, a search through the SMN Cellar of Secrets turned up the rather handsome bath-gel Batmobile from a few years ago, scale unknown but it looks about the same as the AMT model.
SMN Score
At the price, you just have to have this 1:43 scale Batmobile, which is available in the UK from most newsagents and bigger supermarkets. The big question is whether it’ll be worth carrying on with the series, and that’s down to the depth of your pocket and Bat-enthusiasm rating. The next few issues look good though, even if the price will more than double - there’s the 1966 Lincoln Futura-based Batmobile, the 2005 Tumbler, and an intriguing streamliner from the 2009 Batman & Robin comic book.
The Eaglemoss Batmobiles website is primarily for subscriptions, but has a page-turning section where you can have a look inside the bi-weekly magazine shown in our pictures above. Access the Eaglemoss Batmobiles site here.
And view some Batmobiles here. 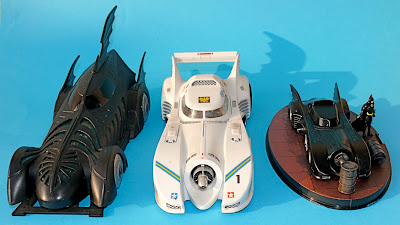 The pictures show, top to bottom:
1-4  Various parts of the splendid - and well priced - Number One issue.
5-7  The 1:43 Batmobile, and a decent effort it is, too.
8-9  The Batmobile with bigger brothers: in white, the AMT 1:25 kit, finished in post-Batman racer markings, and in black, a neat bath gel product, with jet exhaust doubling as fluid dispenser. 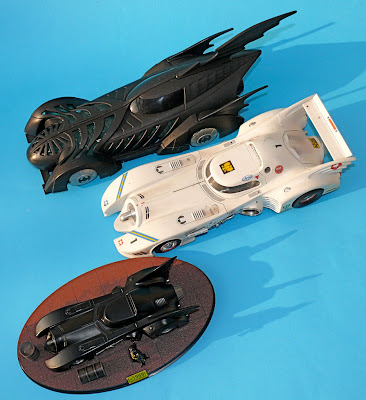