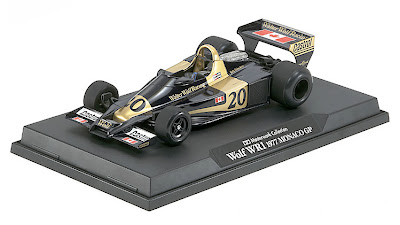 SMN report
Racing car enthusiasts are well catered for with this neat built-up 1:20 scale black-and-gold Wolf WR1, a racing car that the South African Jody Scheckter drove to victory in the 1977 Argentina Grand Prix. Experts of the time reckoned it was something of a lucky first outing for the car - Scheckter started in 10th place, but had to pass only three cars, as the other six retired during the race. But lucky or not that first time, the Wolf-Scheckter combo proved a winner, with victories at two other F1 races in 1977, Scheckter coming second in the World Championship, going on to be outright champ in 1979.


Detail parts
The Wolf WR1 model looks good, and has photo-etch parts for the fine details. It comes with a stand for display purposes and markings for one of 1977’s other victories, the Monaco Grand Prix. It’s good to have a well-finished model of a relatively little-known car - the Walter Wolf Racing team lasted only three seasons before being sold. 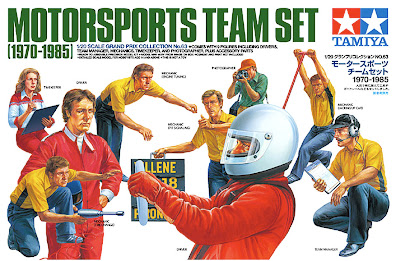 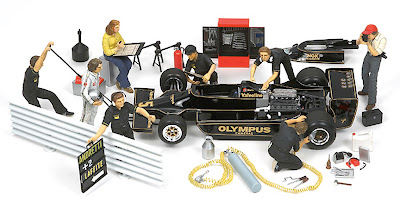 Race team figures
If you like dioramas, then Tamiya’s 1:20 scale race team figures could fit the bill. The figures and equipment are designed to fit the period 1970 to 1985, so there are plenty of cars that could mix and match, including the Wolf WR1. The set of 90 mm (3.6 in) tall figures includes a driver, busy mechanics, a seated timekeeper, even a photographer, though at this scale, his camera is rather small for identification - we’re betting on a Canon, Nikon or Pentax! Useful team accessories include a tool box, impact wrench, driver pit board, flip-up car jack, there’s even a section of guard rail. It’s a neat, and useful, set to have, and of course you have total freedom to paint them in the colours of whichever team you wish.
The 1:20 Tamiya Wolf WR1 is available here.
A bigger 1:12 scale Wolf WR1 is available here.
Pix courtesy Tamiya, SMN studio.
Email ThisBlogThis!Share to TwitterShare to FacebookShare to Pinterest
Labels: 1:35, Afrika Corps, F1, Jody Scheckter, Race team figures, tamiya, Wolf WR1
Newer Post Older Post Home