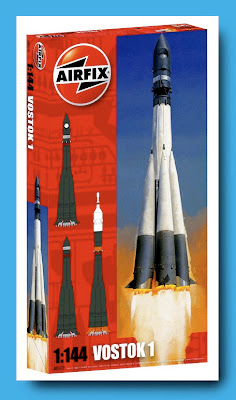 SMN report
Last week’s 50th anniversary of Yuri Gagarin’s first human spaceflight - 12 April 1961 - had Mat Irvine looking at the well-produced magabook Space published at the same time. So now let’s have a look at the Airfix reissue of Vostok 1, the rocket that blasted the 27-year old cosmonaut Gagarin into his 108 minute orbital flight, and a certain place in the history books.

Original Vostok box art from Roy Cross
The original Airfix 1:144 Vostok kit has been around a long time, and as you can see from the pic, the splendid box art was from the talented brush of ace artist Roy Cross. The new art is less exciting, that’s for sure (note the James May and Roy Cross interview link below) but looks clean and wholesome, so we won’t complain. 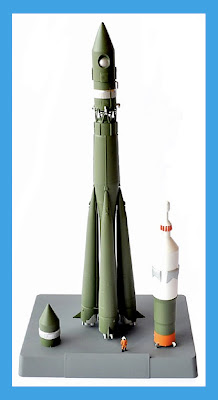 What’s in the box?
As for the kit, the assembled Vostok 1 measures 245 mm (9.6 in) high, and 65 mm (2.6 in) from fin to fin across the base - and talking of bases, you get a neat rectangular pad to sit the rocket on, plus extra parts to make other launch configurations, should you wish. A very useful display touch is the inclusion of a small cosmonaut figure some 12 mm (0.5 in) tall, to give the whole thing a touch of life and a sense of scale. In all, the kit has 102 components, and to mark what was a momentous feat, every space model fan should have one. 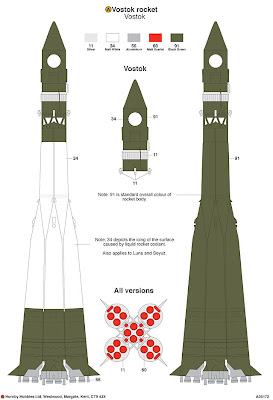 Information downloads from Airfix
The Airfix website (link below) is worth a visit for a useful extra, and that’s a pair of downloadable pdfs featuring precise line art with full paint and finish information. A reduced size version of one of these is shown above. Nice one, Airfix. 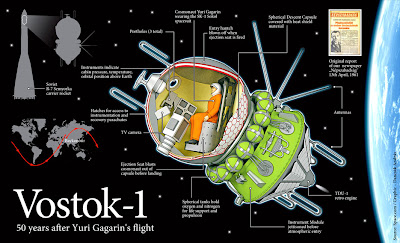